It’s All About Sex

A tiny sperm breaks through the surface of a huge egg. Voilà! In nine months, a new baby will be born. Like most other multicellular organisms, human beings reproduce sexually. In human sexual reproduction, individuals with testes produce sperm, and individuals with ovaries produce eggs, and a new offspring forms when a sperm unites with an egg. How do sperm and eggs form? And how do they arrive together at the right place and time so they can unite to form a new offspring? These are functions of the reproductive system. What Is the Reproductive System?

The reproductive system is the human organ system responsible for the production and fertilization of gametes (sperm or eggs) and carrying of a fetus. Both both sexes gonads produce gametes. A gamete is a haploid cell that combines with another haploid gamete during fertilization, forming a single diploid cell called a zygote. Besides producing gametes, the gonads also produce sex hormones. Sex hormones are endocrine hormones that control the development of sex organs before birth, sexual maturation at puberty, and reproduction once sexual maturation has occurred. Other reproductive system organs have various functions, such as maturing gametes, delivering gametes to the site of fertilization, and providing an environment for the development and growth of offspring.

Sex Differences in the Reproductive System

Starting around the seventh week after conception in genetically male (XY) embryos, a gene called SRY on the Y chromosome (Figure \(\PageIndex{2}\)) initiates the production of multiple proteins. These proteins cause undifferentiated gonadal tissue to develop into testes. Testes secrete hormones — including testosterone — that trigger other changes in the developing offspring (now called a fetus), causing it to develop a complete male reproductive system. Without a Y chromosome, an embryo will develop ovaries, that will produce estrogen. Estrogen, in turn, will lead to the formation of the other organs of a female reproductive system. Figure \(\PageIndex{2}\): The SRY gene on the short arm of the Y chromosome causes the undifferentiated gonads of an embryo to develop into testes. Otherwise, the gonads develop into ovaries.

Feminizing or masculinizing hormone therapy is the administration of exogenous endocrine agents to induce changes in physical appearance. Since hormone therapy is inexpensive relative to surgery and highly effective in the development of secondary sex characteristics (e.g., facial and body hair in female-to-male [FTM] individuals or breast tissue in male-to-females [MTFs]), hormone therapy is often the first, and sometimes only, medical gender affirmation intervention accessed by transgender individuals looking to develop masculine or feminine characteristics consistent with their gender identity. In some cases, hormone therapy may be required before surgical interventions can be conducted. Trans-females are prescribed estrogen and anti-testosterone medication, such as cyproterone acetate and spironolactone. Trans-men are prescribed testosterone.

The main structures of the male reproductive system are external to the body and illustrated in Figure \(\PageIndex{3}\). The two testes (singular, testis) hang between the thighs in a sac of skin called the scrotum. The testes produce both sperm and testosterone. Resting atop each testis is a coiled structure called the epididymis (plural, epididymes). The function of the epididymes is to mature and store sperm. The penis is a tubular organ that contains the urethra and has the ability to stiffen during sexual arousal. Sperm passes out of the body through the urethra during a sexual climax (orgasm). This release of sperm is called ejaculation.

In addition to these organs, there are several ducts and glands that are internal to the body. The ducts, which include the vas deferens (also called the ductus deferens), transport sperm from the epididymis to the urethra. The glands, which include the prostate gland and seminal vesicles, produce fluids that become part of semen. Semen is the fluid that carries sperm through the urethra and out of the body. It contains substances that control pH and provide sperm with nutrients for energy. 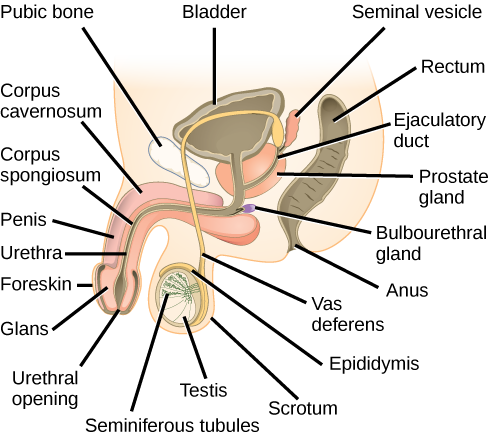 The main structures of the female reproductive system are internal to the body and shown in Figure \(\PageIndex{4}\). They include the paired ovaries, which are small, oval structures that produce eggs and secrete estrogen. The two Fallopian tubes (aka uterine tubes) start near the ovaries and end at the uterus. Their function is to transport eggs from the ovaries to the uterus. If an egg is fertilized, it usually occurs while it is traveling through a Fallopian tube. The uterus is a pear-shaped muscular organ that functions to carry a fetus until birth. It can expand greatly to accommodate a growing fetus, and its muscular walls can contract forcefully during labor to push the baby into the vagina. The vagina is a tubular tract connecting the uterus to the outside of the body. The vagina is where sperm are usually deposited during sexual intercourse and ejaculation. The vagina is also called the birth canal because a baby travels through the vagina to leave the body during birth.

The external structures of the female reproductive system are referred to collectively as the vulva. They include the clitoris, which is homologous to the male penis. They also include two pairs of labia (singular, labium), which surround and protect the openings of the urethra and vagina.

People's sense of gender identity does not always match their anatomy. Some people do not identify as either male or female, and instead, they identify as non-binary, or genderqueer. Others may identify as a gender that is the opposite of what is typically associated with their chromosomes or reproductive organs. These people are called transgender, and they may choose to transition to the opposite gender, a process that may or may not involve physical modifications. Watch the video below to learn about the use of hormones in gender transitioning.

Sex determination may be more complicated than originally thought. Check out this video to learn more: