A central bank can use the power it has over the monetary base and interest rates to pursue any one of three possible instrument targets. It might:

However, it must choose. Controlling one of these instrument targets uses all the central bank’s power, and it cannot pursue a second target at the same time.

The central bank chooses among these instrument targets based on its judgment as to which target will achieve the best results in terms of its broad monetary policy objective: to promote economic stability at potential output with low inflation. The Bank of Canada has conducted its monetary policy in terms of each of these instruments at different times in the recent past.

In the 1970s, a sharp rise in inflation shifted the focus of monetary policy toward inflation control. At that time, developments in economic theory emphasized a strong link between money, money supply growth, and inflation. Central banks in many industrial countries shifted their focus to money supply control. Canada had dropped the fixed exchange rate target in 1970. In 1975, the Bank of Canada adopted money supply targets as its policy instrument and used them until 1982 in an attempt to control inflation and promote a strong economy. By adjusting interest rates based on its understanding of the demand for money balances, the Bank was able to meet the targets for the growth in the money supply M1 that it set and revised from time to time.

However, controlling the money supply required wide fluctuations in interest rates and in the exchange rate. Financial markets did not like this volatility. More importantly, success in controlling M1 did not bring success in controlling inflation. The relationship between money supply, prices, and inflation turned out to be less stable than expected. The Bank abandoned its M1 control targets in 1982 and began a search for a better target for monetary policy.

In the early 1990s, the Bank of Canada and central banks in many other countries, including Australia, New Zealand, Sweden, the United Kingdom, and the European Union, decided to set explicit inflation rate targets for monetary policy. The Bank of Canada began to use interest rate setting as its monetary policy instrument, making changes in the interest rate, as necessary, to keep the Canadian inflation rate within a target range of 1 percent to 3 percent.

The shifts to formal inflation targets for monetary policy in 1991, and the adjustment to that policy shift, were sources of a substantial policy debate in Canada. Inflation was reduced as planned, but with a deep and prolonged recession in real GDP and persistently high rates of unemployment. Sustained economic growth did not resume until the mid-1990s, and by most estimates, including those by the Bank of Canada, the recessionary GDP gap persisted until the end of the decade.3 The Bank continues today to focus on an inflation rate in the 1 percent to 3 percent range as its monetary policy target. A summary of the costs and benefits of inflation that lie behind its inflation targeting are offered by the Bank of Canada at: http://goo.gl/Kh7okG.

In Canada, the overnight rate is now the Bank of Canada’s key policy instrument. This is the interest rate that large financial institutions receive or pay on loans from one day until the next. The Bank implements monetary policy by setting a target for the overnight rate at the midpoint of an operating band that is plus or minus one-quarter of one percentage point, or 25 basis points, from the target rate.

Overnight rate: the interest rate large financial institutions receive or pay on loans from one day until the next.

The Bank of Canada tells financial markets the direction in which it wants interest rates to move, by making changes to its target overnight rate and operating band. Changes in the target overnight rate lead to changes in interest rates banks offer to lenders and depositors. A lower target lowers bank lending rates, encouraging more borrowing by households and businesses and a corresponding expansion in the money supply.

Figure 10.2 shows the Bank’s settings and changes of the overnight interest rate operating band over the past 13 years. From mid-2004 to late 2007 period, for example, the plot shows the Bank raised its overnight rate setting by steps of 0.25 percent (25 basis points) from 2.5 percent to 4.5 percent. Its intention was to reduce monetary stimulus to keep the economy working at potential output, with projected growth of real GDP at 3.0 percent and projected inflation at its target 2.0 percent. By contrast from July 2007 to March 2009 the Bank cut its setting for the overnight rate, in steps of 25 to 75 basis points, by a total of 400 basis points from 4.5 percent to 0.5 percent. Its intention then was to provide stimulus to and support for domestic financial markets and economic activity as the global financial crisis developed and spread. You can read a brief analysis underlying each of the Bank’s decisions to change or hold constant its overnight rate target in the press releases on the Bank’s website: http://goo.gl/w63EiJ.

By setting the overnight interest rate the Bank has a direct impact on interest rates that are important to the monetary transmission mechanism. Banks respond to a rise in the overnight rate by raising their prime lending rate, which is the base for most of the interest rates on their lending. Rates on business and consumer lines of credit, for example, are linked to the prime rate, and move up and down with it. The connection to mortgage rates is also strong and they move with the overnight rate, although the link is not quite as tight. These interest rates cover about two thirds of bank financing in Canada. They make a strong link between the Bank of Canada’s monetary policy action, expenditure, and aggregate demand. Figure 10.3 shows the relationship between changes in the setting of the overnight rate and other interest rates.

Prime lending rate: the base for setting the interest rates charged by banks on loans and lines of credit. Other countries implement monetary policy by setting similar interest rates. The overnight rate set by the Bank of Canada is comparable to the United States Federal Reserve’s target for the federal funds rate, and the Bank of England’s two-week “repo rate,” and the minimum bid rate for refinancing operations, the repo rate, set by the European Central Bank.

Institutional arrangements are the key to the Bank of Canada’s use of the overnight rate as its policy instrument. The payments made by individuals and businesses, and their receipts, flow through the banking system. Some are small paper-based transactions that involve the writing of cheques on deposit accounts. Others, and indeed the majority, are transfers of large deposits between bank customers. On any day, an individual bank may take in more deposits through these transfers than it pays out, or pay out more than it takes in. Any difference in either case is settled using balances held on deposit at the Bank of Canada. Technology now allows for same day settlement of large-value transactions, and an individual bank’s settlement balances can change quickly.

A positive settlement balance also imposes a cost. The Bank of Canada does pay interest on a positive balance in a bank’s account, but it pays at its deposit rate. That rate is set one-quarter of one percentage point below the overnight rate. Not lending a positive balance to another bank at the overnight rate and accepting the Bank of Canada’s deposit rate carries an opportunity cost a bank would prefer to avoid. This is a further incentive to maintain a zero settlement balance at the Bank of Canada.

This regulatory and institutional environment gives the Bank of Canada a framework for setting the interest rate to implement its monetary policy. The Bank makes eight scheduled announcements about its target for the overnight rate, and the operating band it is setting for the overnight rate. These announcements are made in press releases and include a brief explanation of the economic conditions on which the Bank’s rate-setting decision is based.

To maintain the overnight interest rate within the target band, the Bank of Canada must intervene in the market to cover any shortages or remove any surpluses of funds that would push rates beyond its target. The Bank has two tools it uses for this purpose.

One tool is the special purchase and resale agreement (SPRA). This is a transaction initiated by the Bank of Canada that puts cash into the system on a very short-term basis. It is used to maintain the target overnight rate, more specifically to offset upward pressure on the rate.

In an SPRA, the Bank offers to buy Government of Canada securities from major financial institutions with an agreement to sell them back the next business day, at a predetermined price. The financial market gets an overnight injection of monetary base. The difference between the purchase and resale price determines the overnight interest rate on the transactions. Banks are willing to enter into these agreements with the Bank of Canada because they provide cash for the banks at rates of interest below what they would otherwise have to pay in the overnight market.

SPRA: A Bank of Canada purchase of securities one day combined with an agreed resale of the securities the next day. SRA: A Bank of Canada sale of securities one day combined with an agreed repurchase of the securities the next day. 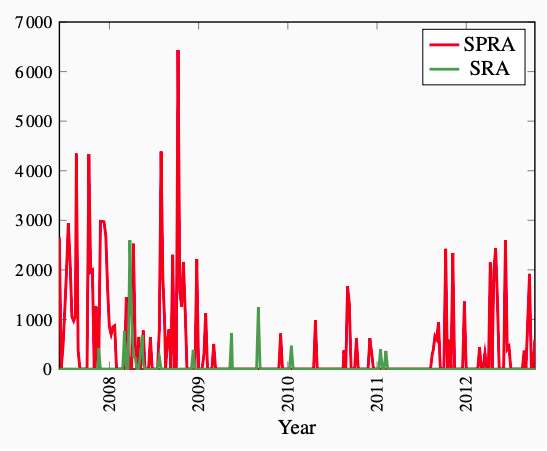 While these operations by the Bank of Canada may seem quite complex, they have a simple effect. Like open-market operations, SPRAs and SRAs increase or decrease the monetary base. In this case, however, the buyers and sellers in the market are limited to a few major financial institutions rather than the full market. Furthermore, changes in the monetary base are very short-term, just one day. The objective is to set and control short-term interest rates, the monetary policy instrument used by the Bank of Canada.

2We study different exchange rate policies in detail in Chapter 14.