We have emphasized several times the importance of the ceteris paribus assumption when exploring the impact of different prices on the quantity demanded: we assume all other influences on the purchase decision are unchanged (at least momentarily). These other influences fall into several broad categories: the prices of related goods; the incomes of buyers; buyer tastes; and expectations about the future. Before proceeding, note that we are dealing with market demand rather than demand by one individual (the precise relationship between the two is developed later in this chapter).

The Prices of Related Goods

We expect that the price of other forms of energy would impact the price of natural gas. For example, if electricity, oil or coal becomes less expensive we would expect some buyers to switch to these other products. Alternatively, if gas-burning furnaces experience a technological breakthrough that makes them more efficient and cheaper we would expect some users of other fuels to move to gas. Among these examples, it is clear that oil and electricity are substitute fuels for gas; in contrast the efficient new gas furnace complements the use of gas. We use these terms, substitutes and complements, to describe products that influence the demand for the primary good.

Complementary goods: when a price reduction (rise) for a related product increases (reduces) the demand for a primary product, it is a complement for the primary product.

Most goods are demanded in greater quantity in response to higher incomes at any given price. But there are exceptions. For example, public transit demand may decline at any price when household incomes rise, because some individuals move to cars. Or the demand for laundromats may decline in response to higher incomes, as households purchase more of their own consumer durables – washers and driers. We use the term inferior good to define these cases: An inferior good is one whose demand declines in response to increasing incomes, whereas a normal good experiences an increase in demand in response to rising incomes.

An inferior good is one whose demand falls in response to higher incomes.

A normal good is one whose demand increases in response to higher incomes.

There is a further sense in which consumer incomes influence demand, and this relates to how the incomes are distributed in the economy. In our discussion above we stated that higher total incomes shift demand curves outwards when goods are normal. But think of the difference in the demand for electronic readers between Portugal and Saudi Arabia. These economies have roughly the same average per-person income, but incomes are distributed more unequally in Saudi Arabia. It does not have a large middle class that can afford electronic readers or iPads, despite the huge wealth held by the elite. In contrast, Portugal has a relatively larger middle class that can afford such goods. Consequently, the distribution of income can be an important determinant of the demand for many commodities and services.

While demand functions are drawn on the assumption that tastes are constant, in an evolving world they are not. We are all subject to peer pressure, the fashion industry, marketing, and a desire to maintain our image. If the fashion industry dictates that lapels or long skirts are de rigueur for the coming season, some fashion-conscious individuals will discard a large segment of their wardrobe, even though the clothes may be in perfectly good condition: Their demand is influenced by the dictates of current fashion.

Correspondingly, the items that other individuals buy or use frequently determine our own purchases. Businesses frequently decide that all of their employees will have the same type of computer and software on account of network economies: It is easier to communicate if equipment is compatible, and it is less costly to maintain infrastructure where the variety is less.

In our natural gas example, if households expected that the price of natural gas was going to stay low for many years – perhaps on account of the discovery of large deposits – then they would be tempted to purchase a gas burning furnace rather than an oil burning furnace, particularly if they anticipated that the price of oil would increase. In this example, it is more than the current price that determines choices; the prices that are expected to prevail in the future also determine current demand.

Expectations are particularly important in stock markets. When investors anticipate that corporations will earn high rewards in the future they will buy a stock today. If enough people believe this, the price of the stock will be driven upward on the market, even before profitable earnings are registered. 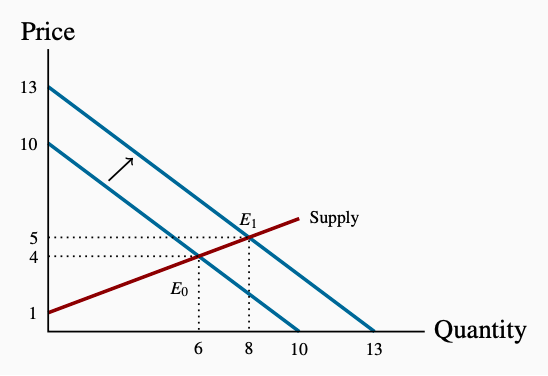 In the middle of its second mandate, the Bush Administration in the US decided to encourage the production of ethanol – a fuel that is less polluting than gasoline. The target production was 35 billion for 2017 – from a base of 1 billion gallons in 2000. Corn is the principal input in ethanol production. It is used primarily as animal feed, as a sweetener and a food for humans. The target was to be met with the help of a subsidy to producers and a tariff on imports of Brazil’s sugar-cane based ethanol.

The impact on corn prices was immediate; from a farm-gate price of $2 per bushel in 2005, the price reached the $4 range two years later, despite a significant increase in production. In 2012 the price is $7. While other factors, such as growing incomes, have stimulated the demand for corn; ethanol is seen as the main price driver.

The wider impact of these developments was that the prices of virtually all grains increased in tandem with corn. For example, the prices of sorghum and barley increased because of a switch in land use towards corn. Corn was seen as more profitable, less acreage was allocated to other grains, and the supply of these other grains fell.

While producer benefited from the price rise, consumers – particularly those in less developed economies – experienced a dramatic increase in their basic living costs. Visit the site of the United Nations’ Food and Agricultural Organization for an assessment.

In terms of supply and demand shifts, the demand side has dominated. The ethanol drive, combined with secular growth in the demand for food, means that the demand for grains shifted outward faster than the supply, as illustrated in Figure 3.4 below.

How are such changes reflected in our economic model? Let us say that market research quantifies the degree to which the demand curve shifts: Market analysis indicates that the new demand curve is given by P = 13 − Q. Note that the intercept is greater while the slope is unchanged, so the demand curve in this instance shifts outward while maintaining the same slope; it is parallel to the original demand curve.

The new market equilibrium can be established by solving for the intersection of the new demand curve with the existing supply curve. Let us do it.

We may well ask why so much emphasis in our diagrams and analysis is placed on the relationship between price and quantity, rather than on the relationship between quantity and its other determinants. The answer is that we could indeed draw diagrams with quantity on the horizontal axis and a measure of one of these other influences on the vertical axis. But the price mechanism plays a very important role. Variations in price are what equilibrate the market. By focusing primarily upon the price, we see the self-correcting mechanism by which the market reacts to excess supply or excess demand.

In addition, this analysis illustrates the method of comparative statics—examining the impact of changing one of the other things that are assumed constant in the supply and demand diagrams.

Comparative static analysis compares an initial equilibrium with a new equilibrium, where the difference is due to a change in one of the other things that lie behind the demand curve or the supply curve.

Comparative obviously denotes the idea of a comparison, and static means that we are not in a state of motion. Hence we use these words in conjunction to indicate that we compare one outcome with another, without being concerned too much about the transition from an initial equilibrium to a final equilibrium. The transition would be concerned with dynamics rather than statics. In Figure 3.2 we explain the difference between the points E0 and E1 by indicating that there has been a change in incomes or in the price of a substitute good. We do not attempt to analyze the details of this move or the exact path from E0 to E1.