Anticipatory socialization was first defined by sociologist Robert K. Merton. It has its origins in a 1949 study of the United States military which found that privates who modeled their attitudes and behaviors on those of officers were more likely to be promoted than those who did not.

When people are blocked from access to a group they might have wanted to join, they reject that group’s values and norms. Instead, they begin an anticipatory socialization process with groups that are more receptive to them. One example of this is the case of economically disadvantaged teenagers who seek to become drug dealers rather than professionals. While some critics would claim that these individuals lack motivation, some sociologists say they are simply making a pragmatic adjustment to the opportunities available to them.

Resocialization is defined as radically changing someone’s personality by carefully controlling their environment. Total institutions aim to radically alter residents’ personalities through deliberate manipulation of their environment. Key examples include the process of resocializing new recruits into the military so that they can operate as soldiers (or, in other words, as members of a cohesive unit) and the reverse process, in which those who have become accustomed to such roles return to society after military discharge. Resocialization may also be required for inmates who come out of prison and need to acclimate themselves back into civilian life.

Resocialization is a two-part process. First, the staff of the institution tries to erode the residents’ identities and sense of independence. Strategies include forcing individuals to surrender all personal possessions, cut their hair in a uniform manner, and wear standardized clothing. Independence can be eroded by subjecting residents to humiliating and degrading procedures. Examples include strip searches, fingerprinting, and replacing residents’ given names with serial numbers or code names. Second, resocialization involves the systematic attempt to build a different personality or self. This is generally accomplished through a system of rewards and punishments. The privilege of reading a book, watching television, or making a phone call can be powerful motivation to conform. Conformity occurs when individuals change their behavior to fit the expectations of an authority figure or the expectations of a larger group. 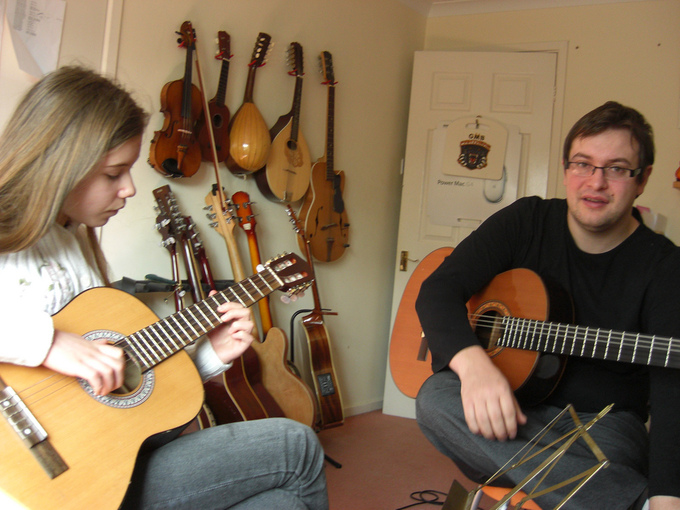 Guitar Lessons: The young woman is interacting with her professor in anticipation of being associated with other guitarists