As technology has opened up a new space for cyberculture, new forms of deviance and social control have appeared. Some individuals use technology as a means of deviating from more traditional cultural norms. For example, in the United States, employees in offices are encouraged to remain productive and efficient, letting their minds wander off-task as little as possible. In the past decade, most companies have installed high-speed internet access as a means of improving efficiency. However, employees often reappropriate the internet access to avoid work by using social networking sites. Such procrastination and corporate inefficiency stemming from internet access is called “cyberloafing. ”

In addition to new forms of deviance in traditional cultural mores, new forms of deviance have arisen within cyberculture. New technologies result in new standards of how to engage with them. The behaviors of deviant employees ultimately have a negative impact on the overall productivity of an organization. For this reason, all of these behaviors are considered production deviance. More serious cases of deviant behavior involve property deviance. Property deviance refers to workers damaging an employer’s property without authorization. This type of deviance typically involves theft but may include sabotage, intentional errors in work, and the misuse of expense accounts.

Just as new forms of deviance have come about as a result of technological advances, so too have new means of controlling deviant populations. In reaction to cyberloafing, companies have developed new technologies to monitor employees’ computers and restrict social networking during the workday. These methods include installing proxy servers to prevent programs from accessing resources like Internet Relay Chat, AOL Instant Messenger, or online gambling services. Other practices include strict disciplinary measures for employees found cyberloafing, and carrot-and-stick measures, such as providing free or subsidized Internet access for employees outside of working hours. Technology is used in policing to monitor formal deviants and encourage conformity to the law and social norms. 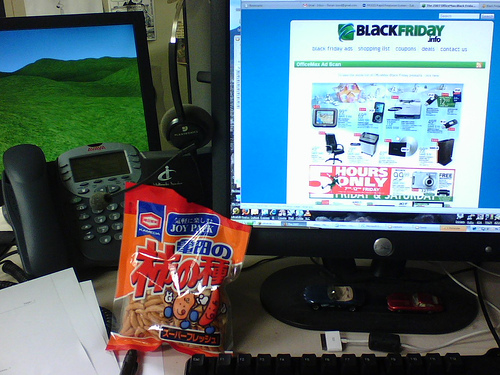 Slacking and Snacking at Work: Misusing company resources to conduct personal business, such as online shopping.