Oppression is the exercise of authority or power in a burdensome, cruel, or unjust manner.

Oppression is the exercise of authority or power in a burdensome, cruel, or unjust manner. It can also be defined as an act or instance of oppressing, the state of being oppressed, and the feeling of being heavily burdened, mentally or physically, by troubles, adverse conditions, and anxiety. Injustice refers to the absence of justice. The term may be applied either in reference to a particular event or act, or to a larger status quo. The term generally refers to misuse, abuse, neglect, or malfeasance that is uncorrected or otherwise sanctioned by a legal system. Misuse and abuse with regard to a particular case or context may represent a systemic failure to serve the cause of justice.

Anarchists and other libertarian socialists argue that police and laws themselves are oppression. The term oppression, in such instances, refers to the subordination of a given group or social category by unjust use of force, authority, or societal norms in order to achieve the effects mentioned above. When institutionalized, formally or informally, it may achieve the dimension of systematic oppression. Oppression is customarily experienced as a consequence of, and expressed in, the form of a prevailing, if unconscious, assumption that the given target is in some way inferior. Oppression is rarely limited solely to formal government action: An individual may be the particular focus of oppression or persecution, and in such circumstances, have no group membership in which to share, and thus maybe mitigate the burden of ostracism.

In psychology, racism, sexism and other prejudices are often studied as individual beliefs which, although not necessarily oppressive in themselves, can lead to oppression if they are codified in law or become parts of a culture. By comparison, in sociology, these prejudices are often studied as being institutionalized systems of oppression in some societies. In sociology, the tools of oppression include a progression of denigration, dehumanization, and demonization which often generate scapegoating, which is used to justify aggression against targeted groups and individuals.

In sociology and psychology, internalized oppression is the manner in which an oppressed group comes to use against itself the methods of the oppressor. For example, sometimes members of marginalized groups hold an oppressive view toward their own group, or start to believe in negative stereotypes. 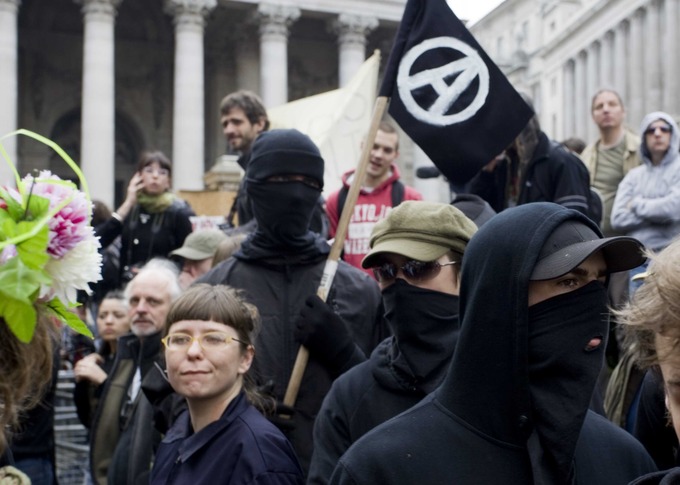 Anarchists at the G20 Summit in London, 2009: Sometimes the oppressed unite to fight back against the oppressors.