Debates continue in and among academic disciplines as to how race should be understood. Most social scientists and biologists believe race is a social construct, meaning it does not have a basis in the natural world but is simply an artificial distinction created by humans.

As a result of this understanding, some researchers have turned from conceptualizing and analyzing human variation by race to doing so in terms of populations, dismissing racial classifications altogether. In the face of the increasing rejection of race as a valid classification scheme, many social scientists have replaced the word race with the word “ethnicity” to refer to self-identifying groups based on shared religion, nationality, or culture.

Following the World War II, alongside empirical and conceptual problems with “race,” evolutionary and social scientists were acutely aware of how beliefs about race had been used to justify discrimination, apartheid, slavery, and genocide. This questioning gained momentum in the 1960s during the United States ‘ civil rights movement and the emergence of numerous anti-colonial movements worldwide. Many academics and researchers across disciplines, therefore, came to the conclusion that race itself is a social construct.

As anthropologists and other evolutionary scientists have shifted away from the language of race to the term “population” to talk about genetic differences, historians, cultural anthropologists and other social scientists have accordingly re-conceptualized the term “race” as exclusively a cultural category or social construct. Many social scientists have also replaced the word race with the word “ethnicity” to refer to self-identifying groups based on beliefs concerning shared culture, ancestry and history.

Race as a Social Construct

The social construction of race has developed within various legal, economic, and sociopolitical contexts, and may be the effect, rather than the cause of major race-related issues. While race is understood to be a social construct by many, most scholars agree that race has real, material effects in housing discrimination, in the legal process, in policing practices, in education, and many other domains of society.

Sociologists Omi and Winant’s theories of racial formation describe how “race is a concept which signifies and symbolizes social conflicts and interests by referring to different types of human bodies. ” The meanings and implications of race are produced and invested in by social institutions, as well as through cultural representations. 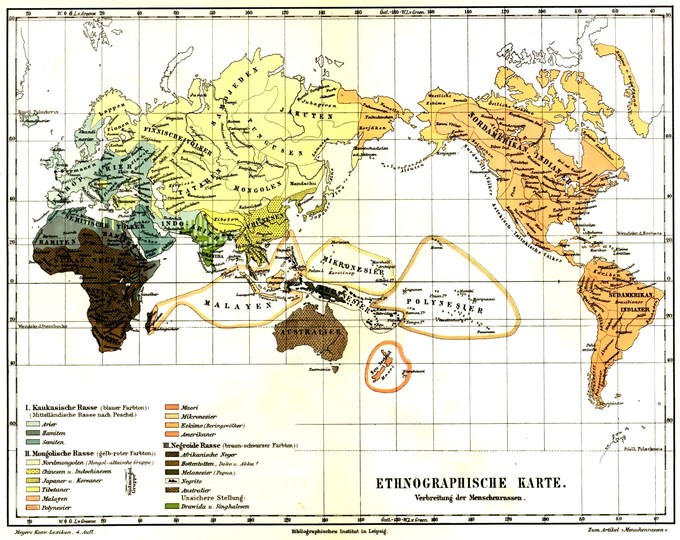 Example of an early modern attempt at racial categorization: This map depicts the three great races, according to Meyers Konversationslexikon, of 1885-90. The subtypes of the Mongoloid race are shown in yellow and orange tones, those of the Europid race in light and medium grayish green-cyan tones, and those of the Negroid race in brown tones. Dravidians and Sinhalese are in olive green, and their classification is described as uncertain. The Mongoloid race sees the widest geographic distribution, including all of the Americas, North Asia, East Asia, Southeast Asia, and the entire inhabited Arctic.