Racism is the belief that different traits of racial groups are inherent and justify discrimination.

Racism is the belief that different inherent traits in racial groups justify discrimination. In the modern English language, the term “racism” is used predominantly as a pejorative epithet. It is applied especially to the practice or advocacy of racial discrimination of a pernicious nature, which is often justified by recourse to racial stereotyping or pseudo-science.

Racism can refer to any or all of the following beliefs and behaviors:

Racism is broadly recognized as an affront to basic human dignity and a violation of human rights. Racism is opposed by almost all mainstream voices in the United States. A number of international treaties have sought to end racism. The United Nations uses a definition of racist discrimination laid out in the International Convention on the Elimination of All Forms of Racial Discrimination adopted in 1965:

“…any distinction, exclusion, restriction or preference based on race, colour, descent, or national or ethnic origin which has the purpose or effect of nullifying or impairing the recognition, enjoyment or exercise, on an equal footing, of human rights and fundamental freedoms in the political, economic, social, cultural or any other field of public life. ”

Children develop an awareness of race and racial stereotypes quite young (between the ages of 5 and 11), and these racial stereotypes affect behavior. For example, children who identify with a racial minority that is stereotyped as not doing well in school tend to perform worse academically when they learn about the stereotype associated with their race.

Structural racism refers to inequalities built into an organization or system. An example of structural racism can be seen in recent research on workplace discrimination. There is widespread discrimination against job applicants whose names were merely perceived as “sounding black. ” These applicants were 50 percent less likely than candidates perceived as having “white-sounding names” to receive callbacks for interviews, no matter what their level of previous experience was. The researchers view these results as strong evidence of unconscious biases rooted in the country’s long history of discrimination. This is an example of structural racism as it shows a widespread established belief system that treats people differently based upon their race.

Additional examples of structural racism include apartheid in South Africa, the system of Jim Crow laws in the U.S., and the inequitable lending practices of banks (i.e., redlining).

Cultural racial discrimination, a variation of structural racism, occurs when the assumption of inferiority of one or more races is built into the a society ‘s cultural norms. Racism is an expression of culture, passed on through enculturation and socialization.

Historical economic or social disparity caused by past racism affects the present generation of the victimized group. For example, racial deficits still exist in formal education, and unconscious racist attitudes still exist against certain members of the general population. This perspective seeks to explain how, for example, African Americans in the U.S. have had their opportunities in life adversely affected due to the enslavement of their ancestors. Disparities in wealth, net worth, and education lend credence to this idea.

One response to racial disparity in the U.S. has been affirmative action. Affirmative action is the practice of favoring or benefiting members of a particular race in areas such as college admissions and workplace advancement, in an attempt to create atmospheres of racial diversity and racial equality. Though lauded by many as a boon to society, giving the less privileged a chance at success and working to overcome historical social disparity, the practice is condemned as racially discriminatory by others. 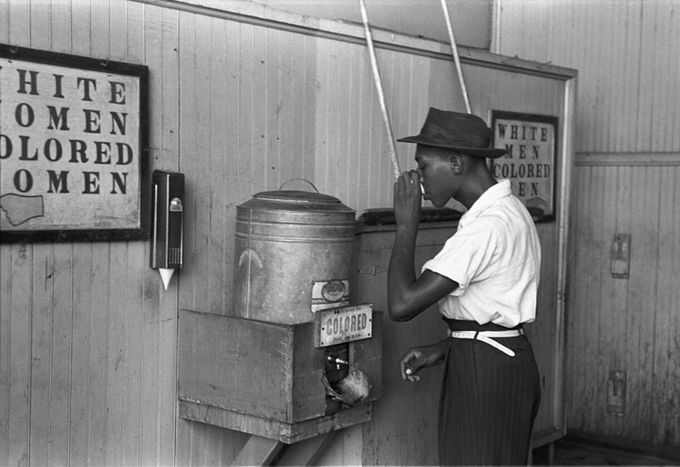 Segregation as a Form of Racism: A “colored” drinking fountain from mid-20th century.