From a symbolic interactionist perspective, gender is produced and reinforced through daily interactions and the use of symbols.

In sociology, interactionism is a theoretical perspective that understands social processes (such as conflict, cooperation, identity formation) as emerging from human interaction. Scholars of this perspective study how individuals act within society, and believe that meaning is produced through the interactions of individuals. According to interactionists, gender stratification exists because people act toward each other on the basis of the meanings they have for one another. Interactionists believe that these meanings are derived through social interaction, and that these meanings are managed and transformed through an interpretive process that people use to make sense of, and handle, the objects that constitute their social worlds.

Social interaction is a face-to-face process that consists of actions, reactions, and mutual adaptation between two or more individuals. The goal of social interaction is to communicate with others. Social interaction includes all language, including body language and mannerisms. Erving Goffman, one of the forefathers of this theoretical perspective, emphasized the importance of control in social interactions. According to Goffman, during an interaction, individuals will attempt to control the behavior of the other participants, in order to attain needed information, and in order to control the perception of one’s own image. If the interaction is in danger of ending before an individual wants it to, it can be conserved through several steps. One conversational partner can conform to the expectations of the other, he or she can ignore certain incidents, or he or she can solve apparent problems.

Symbolic interactionism aims to understand human behavior by analyzing the critical role of symbols in human interaction. This is certainly relevant to the discussion of masculinity and femininity, because the characteristics and practices of both are socially constructed, reproduced, and reinforced through daily interactions. Imagine, for example, that you walk into a bank, hoping to get a small loan for school, a home, or a small business venture. If you meet with a male loan officer, you might state your case logically, listing all of the hard numbers that make you a qualified applicant for the loan. This type of approach would appeal to the analytical characteristics typically associated with masculinity. If you meet with a female loan officer, on the other hand, you might make an emotional appeal, by stating your positive social intentions. This type of approach would appeal to the sensitive and relational characteristics typically associated with femininity.

The meanings attached to symbols are socially created and fluid, instead of natural and static. Because of this, we act and react to symbols based on their current assigned meanings. Both masculinity and feminity are performed gender identities, in the sense that gender is something we do or perform, not something we are . In response to this phenomena, the sociologist Charles H. Cooley’s developed the theory of the “looking-glass self” (1902). In this theory, Cooley argued that an individual’s perception of himself or herself is based primarily how society views him or her. In the context of gender, if society perceives a man as masculine, that man will consider himself as masculine. Thus, when people perform tasks or possess characteristics based on the gender role assigned to them, they are said to be doing gender (rather than “being” gender), a notion first coined by West and Zimmerman (1987). West & Zimmerman emphasized that gender is maintained through accountability. Men and women are expected to perform their gender to the point that it is naturalized, and thus, their status depends on their performance. 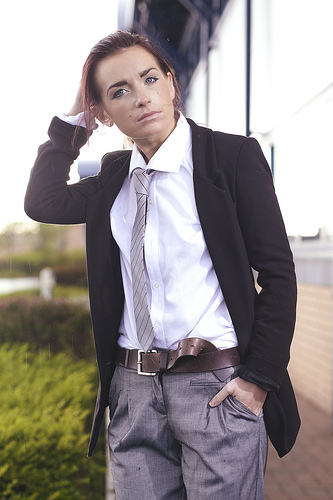 Confounding Expectation: The woman in this picture blurs the boundaries between the symbols that are traditionally considered masculine or feminine. While she has long hair and is wearing makeup, typically feminine markers, her clothes are much more masculine in nature.