With the rise of single-parent households, unmarried mothers have become more common in the United States.

One recent trend illustrating the changing nature of families is the rise in prevalence of the single-parent household. While somewhat more common prior to the 20th century due to the more frequent deaths of spouses, the nuclear family became the societal norm in most Western nations. But what was the prevailing norm for much of the 20th century is no longer the actual norm, nor is it perceived as such.

Since the 1960s, there has been a marked increase in the number of children living with a single parent. The 1960 United States Census reported that 9% of children were dependent on a single parent; this number that has increased to 28% by the 2000 US Census. The spike was caused by an increase in unmarried pregnancies, which 36% of all births by unmarried women, and to the increasing prevalence of divorces among couple.

The prevalence of single mothers as primary caregiver is a part of traditional parenting trends between mothers and fathers. In the United States, 27% of single mothers live below the poverty line, as they lack the financial resources to support their children when the birth father is unresponsive. Although the public is sympathetic with low-wage single mothers, government benefits are fairly low. Many seek assistance by living with another adult, such as a relative, fictive kin, or significant other. Divorced mothers who re-marry have fewer financial struggles than unmarried single mothers, who cannot work for longer periods of time without shirking their child-caring responsibilities. Unmarried mothers are thus more likely to cohabit with another adult. In the United States, the rate of unintended pregnancy is higher among unmarried couples than among married ones. In 1990, 73% of births to unmarried women were unintended at the time of conception, compared to about 44% of births overall. 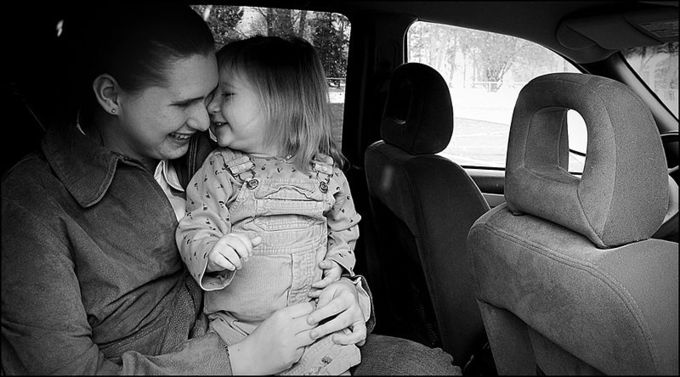 Single Motherhood: Marisa Beagle, sophomore history major, and her daughter, Noelle, sit in the parking lot of the Salem Campus, where she attends school 45 minutes away from her home in East Palestine, near the Pennsylvania border. Marisa and Noelle, 18 months, live with Marisa’s parents. A single parent, Beagle says it’s tough to attend school and raise a daughter simultaneously, but with the support of her family, she’s able to make it work.