Child rearing is the process of supporting the physical, emotional, social, and intellectual development of a child.

Child rearing is the process of promoting and supporting the physical, emotional, social, and intellectual development of a child from infancy to adulthood. Parenting refers to aspects of raising a child aside from the biological relationship. Parenting is usually done by the biological parents of the child in question, with governments and society playing ancillary roles. Orphaned or abandoned children are often reared by non-parent blood relations.

Developmental psychologist Diana Baumrind identified three main parenting styles in early child development: Authoritative, Authoritarian, and Permissive. These parenting styles were later expanded to four, including an Uninvolved style. They involve combinations of acceptance and responsiveness on the one hand, and demand and control on the other.

Authoritarian parenting is very rigid and strict. Parents who practice it have a set of rules and expectations, and they require rigid obedience. If rules are not followed, punishment is most often used to ensure obedience.

Authoritative parenting relies on positive reinforcement and infrequent use of punishment. These parents are more aware of a child’s feelings and capabilities, and support the development of a child’s autonomy within reasonable limits. There is a give-and-take atmosphere involved in parent-child communication, and both control and support are exercised.

With Permissive or Indulgent parenting, a child’s freedom and autonomy are valued above all. These parents rarely find fault with their child and when they do, they tend to rely mostly on reasoning and explanation. There are few rules, few consequences, and children are said to be free from external constraints.

In Uninvolved families, parents are often emotionally absent and sometimes even physically absent. Expectations and regular communication are minimal. These parents are not responsive to a child’s needs and do not demand anything of them behaviorally. They provide for basic survival, but offer little to no engagement.

The ideology of “motherhood” portrays mothers as the ultimate caregivers. They invest copious time in their children, which may affect their job and role in the labor market. Although stay-at-home moms are less common in today’s economy, women statistically spend more time nurturing children than men do.

However, fathers are beginning to spend more hands-on time with their children as parenting roles evolve. Couples are now more likely to share household and child-rearing responsibilities, such as bathing, dressing, feeding, changing diapers, and comforting children, along with cooking and cleaning. 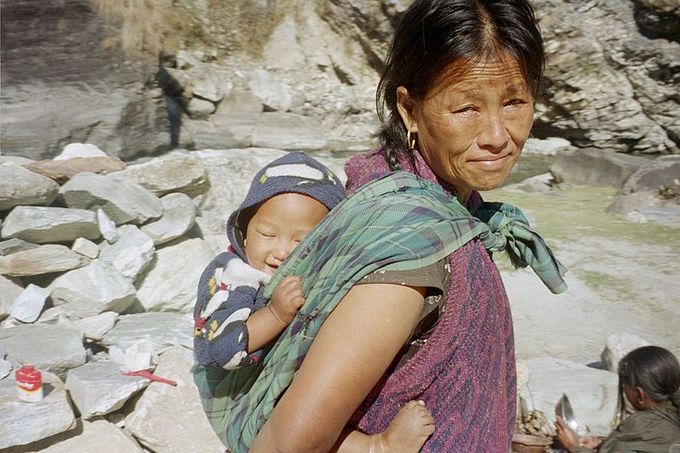 Motherhood: A Nepalese woman and her infant child.