Gender-based achievement gaps suggest the existence of gender bias in the classroom.

Gender-based achievement gaps (especially in math and science ) suggest the existence of gender bias in the classroom.

Although most people would like to believe gender bias in the classroom is no longer a problem, evidence points to a persistent achievement gap between boys and girls. Although girls tend to stay in school longer, have better attendance records, and earn better report card grades, boys outscore girls on most high-stakes tests, including both the math and verbal sections of the SAT. Men also outscore women on standardized tests for graduate school, law school, and medical school.

If test score gaps are evidence of gender bias, where does that gender bias come from? Numerous explanations have been proposed:

Of course, few teachers would admit to bringing gender bias into the classroom, and much of their influence may be unintentional. Nevertheless, teachers may reinforce gender bias when they give more attention to boys or excuse boys’ behavior with the excuse that “boys will be boys. ” Teachers may also reinforce gender bias simply by drawing distinctions between boys and girls. For example, lining up students or seating them by gender affirms the idea that boys and girls should be treated differently. Teachers may also influence students by the way they give praise, encourage a student to correct or expand an answer, criticize, or accept without evaluating a response. Research suggests teachers are more likely to respond to boys with praise or encouragement, whereas they are more likely to respond to girls by simply accepting or acknowledging a response without evaluating it. Because girls are typically socialized to be quiet and passive, teachers may need to actively encourage their participation in class in order to avoid boy-dominated discussion, or a situation in which boys receive more feedback from and interaction with teachers because they more actively participate in class.

One proposed solution to gender bias in the classroom is to separate boys and girls in single-sex classrooms. Theoretically, single-sex classrooms would help students focus without distracting interactions with children of the opposite gender. They could also decrease pressure on girls who feel nervous participating in boy-dominated class discussion. However, empirical studies give mixed evidence as to the efficacy of single-sex schooling, and critics worry that it constitutes a separate-but-equal form of discrimination.

Despite evidence of gender bias, female career access has made steady gains in recent years, due largely to the women’s rights movement. More women are now able to work outside the home; although some may be driven to work not as an expression of liberty or equality, but out of economic necessity. Still, women earn only about 75 cents for every dollar earned by men, and many work in low status, sex-stereotyped occupations. In part, that may be due to the college majors women choose. But why, one might ask, would women be more likely to choose college majors that will not benefit them in careers? Sociologists would point to social influences and cultural expectations.

Further, though most research and debate about gender bias in the classroom focuses on bias against girls, recent evidence suggests that boys may be falling behind girls, especially in literacy. In fact, the latest national test scores, collected by the National Assessment of Educational Progress, show that girls have met or exceeded the reading performance of boys at all age levels; by fourth grade, boys have fallen two years behind girls in their reading and writing skills. The male literacy gap has been attributed to sex-based differences in brain function as well as to social factors like the expectations set by an unwritten “boy code” to discourages boys from expressing emotions. This boy code may make male students less likely to share opinions about literature or express frustrations or difficulties to teachers. Thus, just as social pressures may convince some girls they cannot excel at science or math, social pressures may convince some boys they cannot succeed in reading and writing.

The gendering of school subjects may, in itself, lead to gender bias in the classroom, and, further down the line, gender inequality in the workforce. 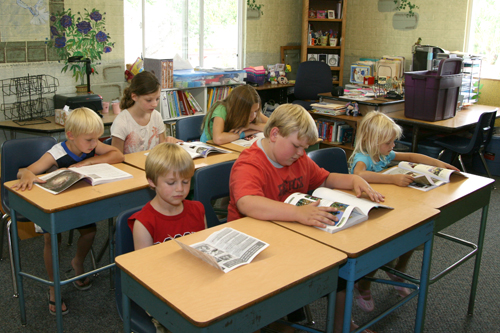 Children in a Classroom: Boys and girls learn together in a classroom.