Counterculture is a term describing the values and norms of a cultural group that run counter to those of the social mainstream of the day.

“Counterculture” is a sociological term that refers to a cultural group or subculture whose values and norms of behavior run counter to those of the region’s social mainstream; it can be considered the cultural equivalent of political opposition.

In the United States, the counterculture of the 1960s became identified with the rejection of conventional social norms of the 1950s. Counterculture youth rejected the cultural standards of their parents, especially with respect to racial segregation and initial widespread support for the Vietnam War.

As the 1960s progressed, widespread tensions developed in American society that tended to flow along generational lines regarding the war in Vietnam, race relations, sexual mores, women’s rights, traditional modes of authority, and a materialistic interpretation of the American Dream. Hippies became the largest countercultural group in the United States. The counterculture also had access to a media eager to present their concerns to a wider public. Demonstrations for social justice created far-reaching changes affecting many aspects of society. 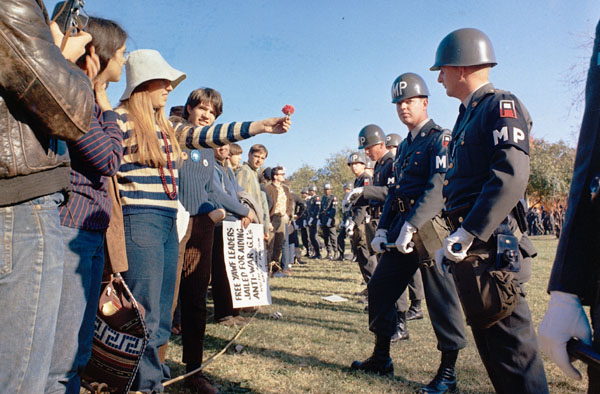 The counterculture in the United States lasted from roughly 1964 to 1973 — coinciding with America’s involvement in Vietnam — and reached its peak in 1967, the “Summer of Love. ” The movement divided the country: to some Americans, these attributes reflected American ideals of free speech, equality, world peace, and the pursuit of happiness; to others, the same attributes reflected a self-indulgent, pointlessly rebellious, unpatriotic, and destructive assault on America’s traditional moral order.

The counterculture collapsed circa 1973, and many have attributed its collapse to two major reasons: First, the most popular of its political goals — civil rights, civil liberties, gender equality, environmentalism, and the end of the Vietnam War — were accomplished. Second, a decline of idealism and hedonism occurred as many notable counterculture figures died, the rest settled into mainstream society and started their own families, and the “magic economy” of the 1960s gave way to the stagflation of the 1970s.