Peer groups can serve as a venue for teaching gender roles, especially if conventional gender social norms are strongly held.

Gender role theory posits that boys and girls learn the appropriate behavior and attitudes from the family and overall culture in which they grow up, and so non-physical gender differences are a product of socialization. Social role theory proposes that the social structure is the underlying force for gender differences. Social role theory proposes that sex-differentiated behavior is motivated by the division of labor between two sexes within a society. Division of labor creates gender roles, which in turn lead to gendered social behavior.

Peer groups can serve as a venue for teaching members gender roles. Gender roles refer to the set of social and behavioral norms that are considered socially appropriate for individuals of a specific sex in the context of a specific culture, and which differ widely across cultures and historical periods.

Through gender-role socialization, group members learn about sex differences, and social and cultural expectations. Biological males are not always masculine and biological females are not always feminine. Both genders can contain different levels of masculinity and femininity. Peer groups can consist of all males, all females, or both males and females.

Peer groups can have great influence on each other’s gender role behavior depending on the amount of pressure applied. If a peer group strongly holds to a conventional gender social norm, members will behave in ways predicted by their gender roles, but if there is not a unanimous peer agreement, gender roles do not correlate with behavior. There is much research that has been done on how gender affects learning within student peer groups. The purpose of a large portion of this research has been to see how gender affects peer cooperative groups, how that affects the relationships that students have within the school setting, and how gender can then affect attainment and learning. One thing that is an influence on peer groups is student behavior.

Knowing early on that children begin to almost restrict themselves to same-gendered groups, it is interesting to see how those interactions within groups take place. Boys tend to participate in more active and forceful activities in larger groups, away from adults, while girls were more likely to play in small groups, near adults. These gender differences are also representative of many stereotypical gender roles within these same-gendered groups. The stereotypes are less prominent when the groups are mixed-gendered.

When children do not conform to the appropriate gender role, they may face negative sanctions such as being criticized or marginalized by their peers. Though many of these sanctions are informal, they can be quite severe. For example, a girl who wishes to take karate class instead of dance lessons may be called a “tomboy,” facing difficulty gaining acceptance from both male and female peer groups. Boys, especially, are subject to intense ridicule for gender nonconformity. 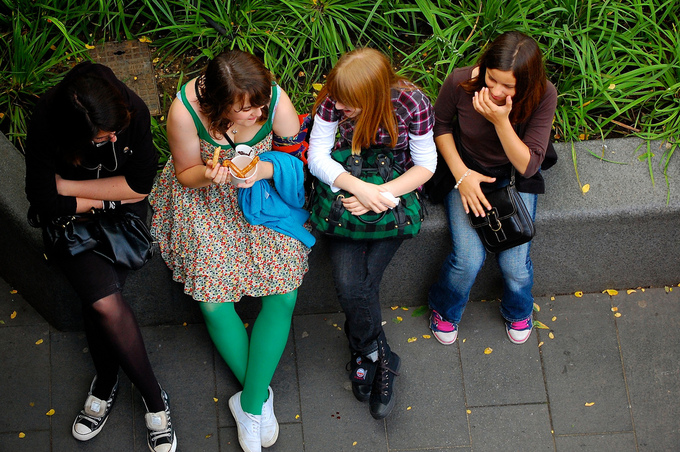 Female Peer Groups: Teenage cliques exert influence upon their members to conform to group standards, including group mores about gender.