We have already discussed techniques for visually representing data (see histograms and frequency polygons). In this section, we present another important graph called a box plot. Box plots are useful for identifying outliers and for comparing distributions. We will explain box plots with the help of data from an in-class experiment. As part of the "Stroop Interference Case Study," students in introductory statistics were presented with a page containing \(30\) colored rectangles. Their task was to name the colors as quickly as possible. Their times (in seconds) were recorded. We'll compare the scores for the \(16\) men and \(31\) women who participated in the experiment by making separate box plots for each gender. Such a display is said to involve parallel box plots.

The data for the women in our sample are shown in Table \(\PageIndex{1}\). 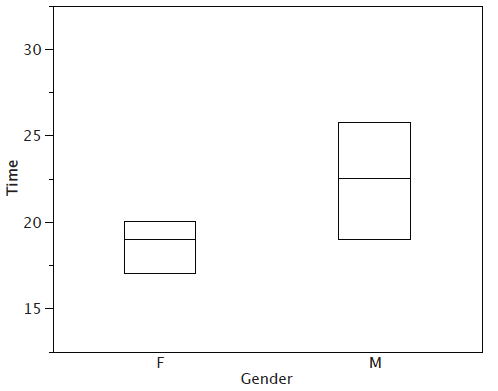 Before proceeding, the terminology in Table \(\PageIndex{2}\) is helpful. 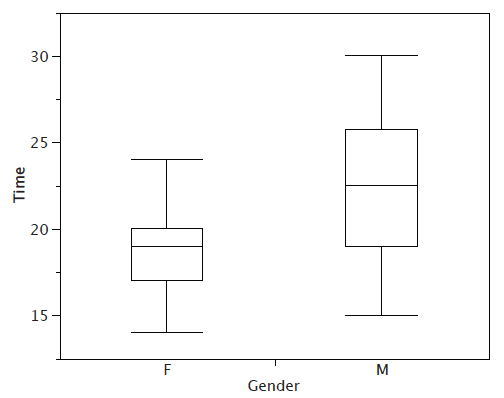 Figure \(\PageIndex{2}\): The box plots with the whiskers drawn Figure \(\PageIndex{3}\): The box plots with the outside value shown

There is one more mark to include in box plots (although sometimes it is omitted). We indicate the mean score for a group by inserting a plus sign. Figure \(\PageIndex{4}\) shows the result of adding means to our box plots. Figure \(\PageIndex{4}\) provides a revealing summary of the data. Since half the scores in a distribution are between the hinges (recall that the hinges are the \(25^{th}\) and \(75^{th}\) percentiles), we see that half the women's times are between \(17\) and \(20\) seconds, whereas half the men's times are between \(19\) and \(25.5\). We also see that women generally named the colors faster than the men did, although one woman was slower than almost all of the men. Figure \(\PageIndex{5}\) shows the box plot for the women's data with detailed labels. Figure \(\PageIndex{5}\): The box plot for the women's data with detailed labels

Here are some other examples of box plots:

Example \(\PageIndex{1}\): Time to move the mouse over a target

The data come from a task in which the goal is to move a computer mouse to a target on the screen as fast as possible. On \(20\) of the trials, the target was a small rectangle; on the other \(20\), the target was a large rectangle. Time to reach the target was recorded on each trial. The box plots of the two distributions are shown below. You can see that although there is some overlap in times, it generally took longer to move the mouse to the small target than to the large one.

In \(1969\) the war in Vietnam was at its height. An agency called the Selective Service was charged with finding a fair procedure to determine which young men would be conscripted ("drafted") into the U.S. military. The procedure was supposed to be fair in the sense of not favoring any culturally or economically defined subgroup of American men. It was decided that choosing "draftees" solely on the basis of a person’s birth date would be fair. A birthday lottery was thus devised. Pieces of paper representing the \(366\) days of the year (including \(\text{February 29}\)) were placed in plastic capsules, poured into a rotating drum, and then selected one at a time. The lower the draft number, the sooner the person would be drafted. Men with high enough numbers were not drafted at all.

Statistical analysis programs may offer options on how box plots are created. For example, the box plots in Figure \(\PageIndex{8}\) are constructed from our data but differ from the previous box plots in several ways. Each dot in Figure \(\PageIndex{8}\) represents a group of subjects with the same score (rounded to the nearest second). An alternative graphing technique is to jitter thepoints. This means spreading out different dots at the same horizontal position, one dot for each subject. The exact horizontal position of a dot is determined randomly (under the constraint that different dots don’t overlap exactly). Spreading out the dots helps you to see multiple occurrences of a given score. However, depending on the dot size and the screen resolution, some points may be obscured even if the points are jittererd. Figure \(\PageIndex{9}\) shows what jittering looks like. Different styles of box plots are best for different situations, and there are no firm rules for which to use. When exploring your data, you should try several ways of visualizing them. Which graphs you include in your report should depend on how well different graphs reveal the aspects of the data you consider most important.