In the section on qualitative variables, we saw how bar charts could be used to illustrate the frequencies of different categories. For example, the bar chart shown in Figure \(\PageIndex{1}\) shows how many purchasers of iMac computers were previous Macintosh users, previous Windows users, and new computer purchasers. In this section, we show how bar charts can be used to present other kinds of quantitative information, not just frequency counts. The bar chart in Figure \(\PageIndex{2}\) shows the percent increases in the Dow Jones, Standard and Poor 500 (S & P), and Nasdaq stock indexes from \(\text{May 24 2000 to May 24 2001}\). Notice that both the S & P and the Nasdaq had “negative increases” which means that they decreased in value. In this bar chart, the \(Y\)-axis is not frequency but rather the signed quantity percentage increase. Bar charts are particularly effective for showing change over time. Figure \(\PageIndex{3}\), for example, shows the percent increase in the Consumer Price Index (CPI) over four three-month periods. The fluctuation in inflation is apparent in the graph. 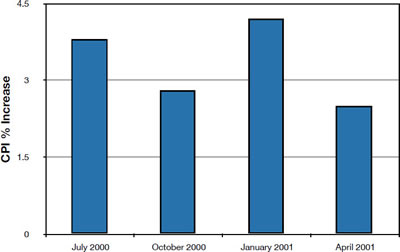 Figure \(\PageIndex{3}\): Percent change in the CPI over time. Each bar represents percent increase for the three months ending at the date indicated

Bar charts are often used to compare the means of different experimental conditions. Figure \(\PageIndex{4}\) shows the mean time it took one of us (DL) to move the mouse to either a small target or a large target. On average, more time was required for small targets than for large ones. Figure \(\PageIndex{5}\): Box plots of times to move the mouse to the small and large targets