Up to this point, only two-person interviews have been discussed. However, group interviewing and eliciting information from a large number of people through polling / surveying is also an important information gathering technique for communicators.

In focus groups, you meet with a small group of interviewees who have agreed to discuss a topic or a product. You have a list of questions you present to the interviewees, probing for details and encouraging those in the group to respond to other interviewees’ comments. Subjects for discussion arise from the group, as well as from your agenda of questions. A special strength of the focus group is its capacity to raise issues and enlarge the scope of the discussion. 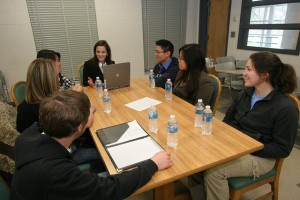 Focus-group interviews are prominent in advertising and marketing research and less frequently used in news and public relations work. Potential members of focus groups can range from grade school students, gathered to taste and judge a new snack, to retired people who discuss the services of travel agencies.

The moderator of a focus group lets the discussion flow freely while it is moving productively and producing useful comment. Tasks include making certain that main points are covered, being receptive to new points that arise, and making sure that each respondent has a chance to talk. The moderator also has the task, at the outset of the discussion, of telling the group how the interview works, of setting up recording equipment and explaining its use to members, and of collecting any permissions that are required of the participants. Focus-group sessions typically are recorded and transcribed for ease of later analysis. Group members are told the method of recording and the subsequent use of their comments. Paying participants a small sum is a typical practice.

Group interviewing is also used in news reporting. For news work, where direct quotes generally are required, group interviewing presents some difficulties. Even if the session is recorded, identifying the voices accurately is difficult (unless it is videotaped.) Under some circumstances, however, group interviewing has advantages. You may find that individuals are unwilling to be interviewed for attribution but are willing to have their stories told as a part of the group’s story. For example, for a story on alcoholism, members of Alcoholics Anonymous may relate their experiences to one another while you listen.

Having permission to record the discussion is important in such group interviews, although the recording generally is flawed by extraneous sounds and inaudible voices. As a precaution against flaws in the tape, you should take as many notes as possible. Further, you should, at the end of the session, pass around paper and a pencil, requesting names, telephone numbers and e-mail addresses to contact for later clarifications and as a check on accuracy. While this may seem to violate the “anonymity” provision, group members may have come to trust you during the meeting, and some may be willing to be called after the interview so their comments can be clarified or verified before the story is written. In addition, follow-up telephone calls may elicit other important information that did not emerge during the group interview.