Aggregate expenditure is the current value of all the finished goods and services in the economy.

Written out the equation is: aggregate expenditure equals the sum of the household consumption (C), investments (I), government spending (G), and net exports (NX).

The aggregate expenditure determines the total amount that firms and households plan to spend on goods and services at each level of income. 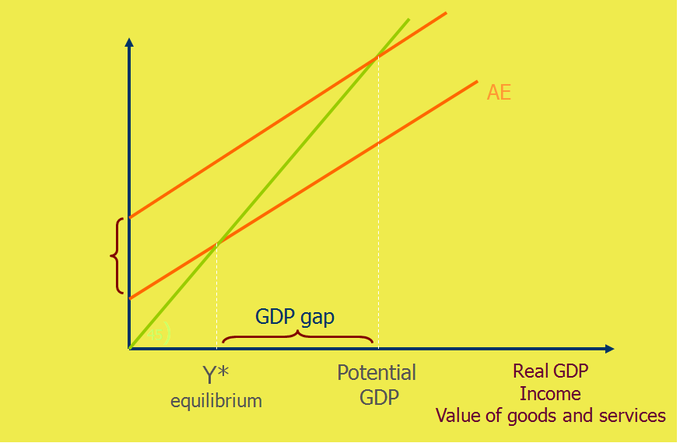 Aggregate Expenditure: This graph shows the aggregate expenditure model. It is used to determine and graph the real GPD, potential GDP, and point of equilibrium. A shift in supply or demand impacts the GDP.

When there is excess supply over the expenditure, there is a reduction in either the prices or the quantity of the output which reduces the total output (GDP) of the economy.

In contrast, when there is an excess of expenditure over supply, there is excess demand which leads to an increase in prices or output (higher GDP). A rise in the aggregate expenditure pushes the economy towards a higher equilibrium and a higher potential of the GDP.

An economy is said to be at equilibrium when aggregate expenditure is equal to the aggregate supply (production) in the economy. Aggregate Expenditure – Equilibrium: In this graph, equilibrium is reached when the total demand (AD) equals the total amount of output (Y). The equilibrium point is where the blue line intersects with the black line.

Classical economists believed in Say’s law, which states that supply creates its own demand. This idea stems from the belief that wages, prices, and interest rage were all flexible. Classical economics states that the factor payments (wage and rental payments) made during the production process create enough income in the economy to create a demand for the products that were produced. This belief is parallel to Adam Smith’s invisible hand – markets achieve equilibrium through the market forces that impact economic activity.

The classical aggregate expenditure model is: \(\mathrm{AE = C + I}\). An economy is said to be at equilibrium when the aggregate expenditure is equal to the aggregate supply (production) in the economy.

In economics, the aggregate supply (AS) is the total supply of goods and services that firms in an economy produce during a specific time period. It represents the total amount of goods and services that firms are willing to sell at a given price level. The aggregate supply curve is graphed as a backwards L-shape in the short-run and vertical in the long-run.

The aggregate supply and aggregate demand determine the output and price for goods and services. The AD-AS model is used to graph the aggregate expenditure and the point of equilibrium. AD-AS Model: This graph shows the AD-AS model where P is the average price level and Y* is the aggregate quantity demanded. The model is used to show how increases in aggregate demand leads to increases in prices (inflation) and in output.

AD-AS Model: This graph shows the AD-AS model where P is the average price level and Y* is the aggregate quantity demanded. The model is used to show how increases in aggregate demand leads to increases in prices (inflation) and in output.

The aggregate expenditure equals the sum of the household consumption (C), investments (I), government spending (G), and net exports (NX).

When the fiscal multiplier exceeds one, the resulting impact on the national income is called the multiplier effect.

Cause of the Multiplier Effect

The multiplier is influenced by an incremental amount of spending that leads to higher consumption spending, increased income, and then even more consumption. As a result, the overall national income is greater than the initial incremental amount of spending. Simply put, an initial shift in aggregate demand may cause a change in aggregate output (as well as the aggregate income it creates) that is a multiplier of the initial change.

Use of the Multiplier Effect

The multiplier effect is a tool that is used by governments to attempt to stimulate aggregate demand in times of recession or economic uncertainty. The government invests money in order to create more jobs, which in turn will generate more spending to stimulate the economy. The goal is that the net increase in disposable income will be greater than the original investment. 1953 U.S. Recession: This graph shows the economic recession that occurred in the U.S. in 1953. During recessions, the government can use the multiplier effect in order to stimulate the economy.

Although the multiplier effect usually measures values of one, there have been cases where multipliers of less than one are measured. This suggests that types of government spending can crowd out private investment or consumer spending that would have taken place without the government spending. Crowding out can occur because the initial increase in spending can cause an increase in the interest rates or the price level.

It has been argued that when a government relies heavily on fiscal multipliers, externalities such as environmental degradation, unsustainable resource depletion, and social consequences can be neglected. Over reliance on fiscal multipliers can cause increased government spending on activities that create negative externalities (pollution, climate change, and resource depletion) instead of positive externalities (increased educational standards, social cohesion, public health, etc.).