Consider an unregulated fishing market like the lobster market considered previously, and let S be the stock of fish. The purpose of this example is illustrative of the logic, rather than an exact accounting of the biology of fish populations, but is not unreasonable. Let S be the stock of a particular species of fish. Our starting point is an environment without fishing: How does the fish population change over time? Denote the change over time in the fish population by \(\begin{equation}S^{\cdot}\left(S^{\cdot}\right.\end{equation}\) is notation for the derivative with respect to time, notation that dates back to Sir Isaac Newton). We assume that population growth follows the logistic equation \(\begin{equation}S^{\cdot}=r S(1-S)\end{equation}\). This equation reflects two underlying assumptions. First, mating and reproduction are proportional to the stock of fish S. Second, survival is proportional to the amount of available resources 1 – S, where 1 is set to be the maximum sustainable population. (Set the units of the number of fish so that 1 is the full population.)

The dynamics of the number of fish are illustrated in Figure 7.5 "Fish population dynamics". On the horizontal axis is the number of fish, and on the vertical axis is the change in S. When \(\begin{equation}S^{\cdot}>0\end{equation}\), S is increasing over time, and the arrows on the horizontal axis reflect this. Similarly, if \(\begin{equation}S^{\cdot}<0\end{equation}\), S is decreasing. 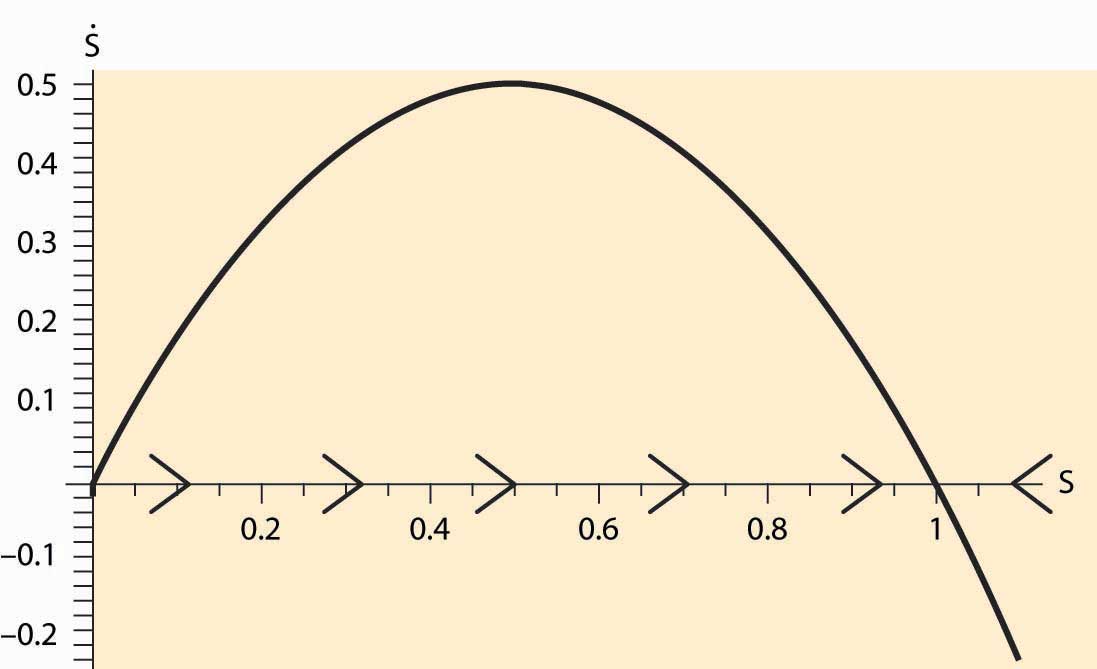 We see that if demand for fish is elastic, fishing will not drive the fish to extinction. Even so, fishing will reduce the stock of fish below the efficient level because individual fishers don’t take account of the externality they impose—their fishing reduces the stock for future generations. The level of fish in the sea converges to S* satisfying

In contrast, if demand is inelastic, fishing may drive the fish to extinction. For example, if r = 2 and a = b = 1, and ε = 0.7, extinction is necessary, as is illustrated in Figure 7.7 "Fish population dynamics: extinction".

It is possible, even with inelastic demand, for there to be a stable fish population. Not all parameter values lead to extinction. Using the same parameters as before, but with ε = 0.9, we obtain a stable outcome as illustrated in Figure 7.8 "Possibility of multiple equilibria". 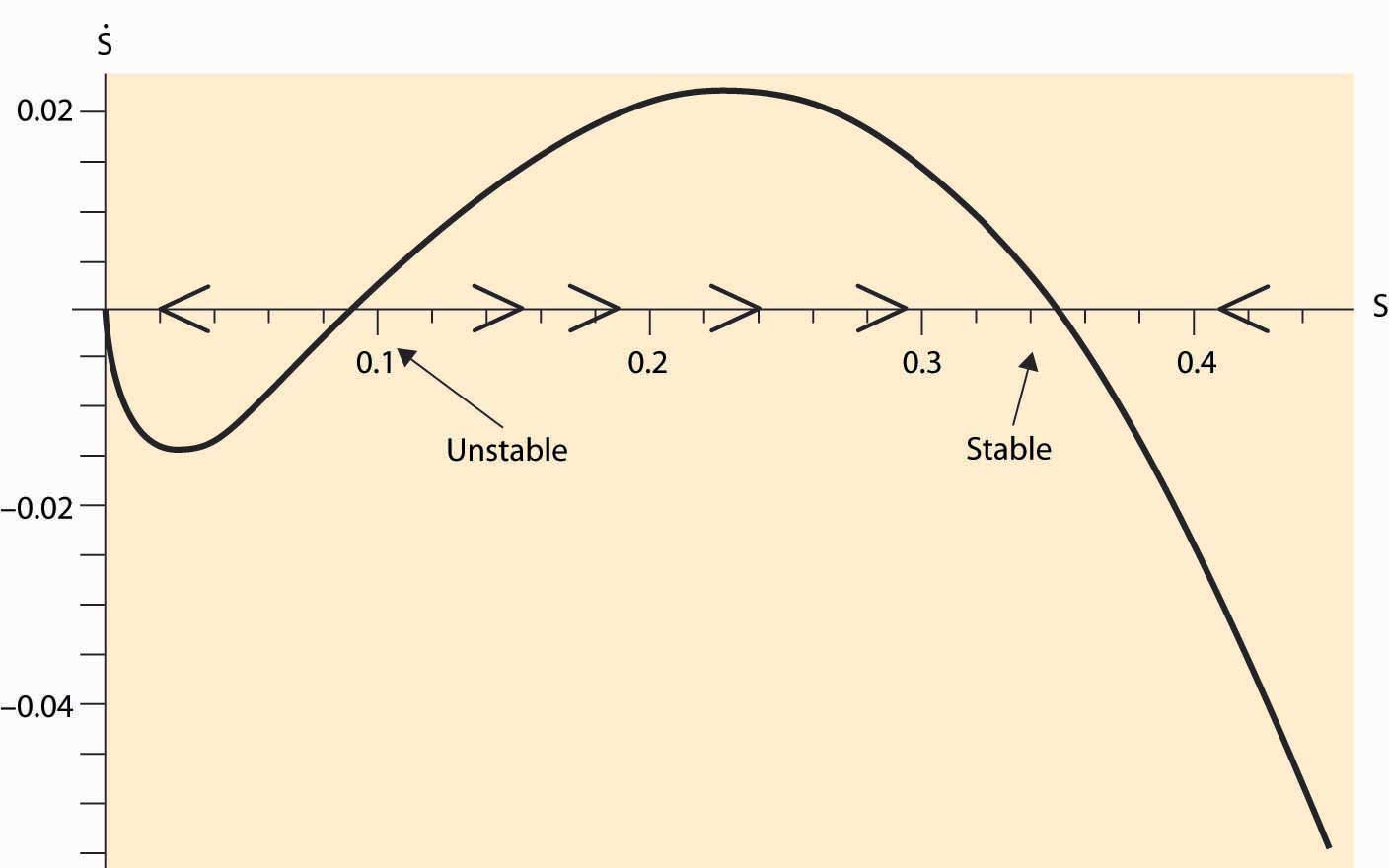 In addition to the stable equilibrium outcome, there is an unstable steady state, which may converge either upward or downward. A feature of fishing with inelastic demand is that there exists a region where extinction is inevitable because, when the stock is near zero, the high demand price induced by inelasticity forces sufficient fishing to ensure extinction.

As a consequence of the fishing externality, nations attempt to regulate fishing, both by extending their own reach 200 miles into the sea and by treaties limiting fishing in the open sea. These regulatory attempts have met with only modest success at preventing overfishing.

What is the efficient stock of fish? This is a challenging mathematical problem, but some insight can be gleaned via a steady-state analysis. A steady state arises when \(\begin{equation}S^{\cdot}=0\end{equation}\). If a constant amount Q is removed, a steady state in the stock must occur at \(\begin{equation}0=S^{\cdot}=r S(1-S)-Q\end{equation}\). This maximum catch then occurs at S = ½ and Q = ¼ r. This is not the efficient level, for it neglects the cost of boats, and the efficient stock will actually be larger. More generally, it is never efficient to send the population below the maximum point on the survival curve plotted in Figure 7.5 "Fish population dynamics".

Conceptually, fishing is an example of the tragedy of the commons externality already discussed. However, the threat of a permanent extinction and alluring possibility of solving dynamic models make it a particularly dramatic example.