Some situations, like the price-cutting game or the apartment cleaning game, are played over and over. Such situations are best modeled as a supergame.The supergame was invented by Robert Aumann (1930–) in 1959. A supergame is a game that is played an infinite number of times, where the players discount the future. The game played each time is known as a stage game. Generally supergames are played in times 1, 2, 3, ….

Cooperation may be possible in supergames, if the future is important enough. Consider the price-cutting game introduced previously and illustrated again in Figure 16.33 "Price cutting game revisited". 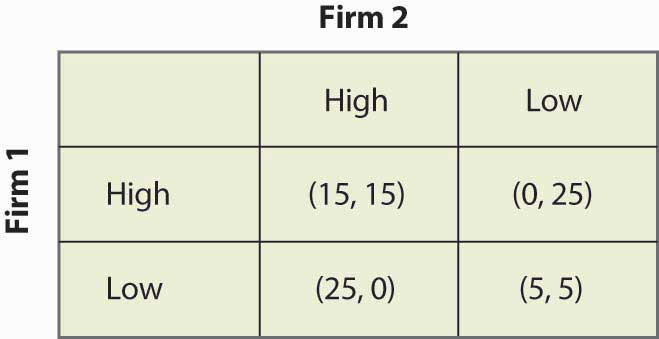 The dominant strategy equilibrium to this game is (Low, Low). It is clearly a subgame perfect equilibrium for the players to just play (Low, Low) over and over again because, if that is what Firm 1 thinks that Firm 2 is doing, Firm 1 does best by pricing Low, and vice versa. But that is not the only equilibrium to the supergame.

Consider the following strategy, called a grim trigger strategy, which involves being nice initially but not nice forever when someone else isn’t cooperative. Price High, until you see your rival price Low. After your rival has priced Low, price Low forever. This is called a trigger strategy because an action of the other player (pricing Low) triggers a change in behavior. It is a grim strategy because it punishes forever.

If \(\begin{equation}–10 + 20δ < 0\end{equation}\), it pays to price Low immediately, at t = 0, because it pays to price Low; and the earlier that one prices Low, the higher the present value. If \(\begin{equation}–10 + 20δ > 0\end{equation}\), it pays to wait forever to price Low; that is, t = ∞. Thus, in particular, the grim trigger strategy is an optimal strategy for a player when the rival is playing the grim trigger strategy if δ ≥ ½. In other words, cooperation in pricing is a subgame perfect equilibrium if the future is important enough; that is, the discount factor δ is high enough.

Figure 16.34 A variation of the price-cutting game 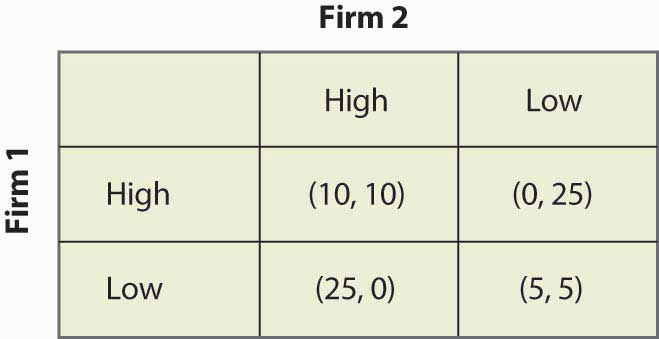 Here, again, the unique equilibrium in the stage game is (Low, Low). But the difference between this game and the previous game is that the total profits of Firms 1 and 2 are higher in either (High, Low) or (Low, High) than in (High, High). One solution is to alternate between (High, Low) and (Low, High). Such alternation can also be supported as an equilibrium, using the grim trigger strategy—that is, if a firm does anything other than what it is supposed to do in the alternating solution, the firms instead play (Low, Low) forever.

The folk theorem says that if the value of the future is high enough, any outcome that is individually rational can be supported as an equilibrium to the supergame. Individual rationality for a player in this context means that the outcome offers a present value of profits at least as high as that offered in the worst equilibrium in the stage game from that player’s perspective. Thus, in the price-cutting game, the worst equilibrium of the stage game offered each player 5, so an outcome can be supported if it offers each player at least a running average of 5.

The folk theorem is a powerful result and shows that there are equilibria to supergames that achieve very good outcomes. The kinds of coordination failures that we saw in the battle of the sexes, and the failure to cooperate in the prisoner’s dilemma, need not arise; and cooperative solutions are possible if the future is sufficiently valuable.

However, it is worth noting some assumptions that have been made in our descriptions of these games—assumptions that matter but are unlikely to be true in practice. First, the players know their own payoffs. Second, they know their rival’s payoffs. They possess a complete description of the available strategies and can calculate the consequences of these strategies—not just for themselves but also for their rivals. Third, each player maximizes his or her expected payoff; they know that their rivals do the same; they know that their rivals know that everyone maximizes; and so on. The economic language for this is the structure of the game, and the players’ preferences are common knowledge. Few real-world games will satisfy these assumptions exactly. Since the success of the grim trigger strategy (and other strategies we haven’t discussed) generally depends upon such knowledge, informational considerations may cause cooperation to break down. Finally, the folk theorem shows us that there are lots of equilibria to supergames but provides no guidance on which ones will be played. These assumptions can be relaxed, although they may lead to wars on the equilibrium path “by accident”—and a need to recover from such wars—so that the grim trigger strategy becomes suboptimal.