Decades ago, economists used to make a big deal about the law of one price, which states that identical goods sell at the same price. The argument in favor of the law of one price is theoretical. Well-informed consumers will buy identical goods from the lowest-price seller. Consequently, the only seller to make any sales is the low-price seller. This kind of consumer behavior forces all sellers to sell at the same price.

There are few markets where the law of one price is actually observed to hold. Organized exchanges, like stock, bond, and commodity markets, will satisfy the law of one price. In addition, gas stations across the street from each other will often offer identical prices, but often is not always.

Many economists believed that the Internet would force prices of standardized goods—DVD players, digital cameras, MP3 players—to a uniform, and uniformly low, price. However, this has not occurred. Moreover, it probably can’t occur in the sense that pure price competition would put the firms out of business and hence can’t represent equilibrium behavior.

There are many markets where prices appear unpredictable to consumers. The price of airline tickets is notorious for unpredictability. The price of milk, soft drinks, paper towels, and canned tuna varies 50% or more depending on whether or not the store has an advertised sale of the item. Prices of goods sold on the Internet vary substantially from day to day.It is often very challenging to assess Internet prices because of variations in shipping charges. Such variation of price across stores is known as price dispersion by economists. It is different from price discrimination because price dispersion entails a given store quoting the same price to all customers; the variation is across stores, while price discrimination varies across customers.

Why are prices so unpredictable? We now develop a model that shows they have to be.

To understand price dispersion, we divide consumers into two types: shoppers and loyal customers. Loyal customers won’t pay more than a price pm for the good, but they consult a particular store. If that store has the good for less than the price pm, the loyal customer buys; otherwise, he or she does not. In contrast, the shoppers buy only from the store offering the lowest price; shoppers are informed about the prices offered by all stores. We let the proportion of shoppers be s. The loyal customers are allocated to the other stores equally so that if there are n stores, each store gets a fraction (1 – s)/n of the customers. Let the marginal cost of the good be c, and assume that c < pm. Both kinds of customers buy only one unit.

For the purposes of this analysis, we will assume that prices can be chosen from the continuum. This makes the analysis more straightforward, but there is an alternate version of the analysis (not developed here) that makes the more reasonable assumption of prices that are an integer number of pennies.

First note that there is no pure strategy equilibrium. To see this, consider the lowest price p charged by any firm. If that price is c, the firm makes no money, so it would do better by raising its price to pm and selling only to the loyal customers. Thus, the lowest price p exceeds c. If there is a tie at p, it pays to break the tie by charging a billionth of a cent less than p, and thereby capturing all the shoppers rather than sharing them with the other firm charging p. So there can’t be a tie.

But no tie at p means the next-lowest firm is charging something strictly greater than p, which means the lowest-price firm can increase price somewhat and not suffer any loss of sales. This contradicts profit maximization for that firm. The conclusion is that firms must randomize and that no pure strategy equilibrium exists.

But how do they randomize? We are going to look for a distribution of prices. Each firm will choose a price from the continuous distribution F, where F(x) is the probability the firm charges a price less than x. What must F look like? We use the logic of mixed strategies: the firm must get the same profits for all prices that might actually be charged under the mixed strategy; otherwise, it would not be willing to randomize.

On each sale, the firm earns p – c. The firm always sells to its loyal customers and in addition captures the shoppers if the other firms price higher. Because no firm will exceed pm, the profits must be the same as the level arising from charging pm, and this gives \(\begin{equation}π(p)=(p−c)( 1−s n +s (1−F(p)) n−1 )=( p m −c) 1−s n .\end{equation}\)

This equation is readily solved for F:

The lower bound of prices arises at the point L where F(L) = 0, or

An interesting aspect of this equation is that it doesn’t depend on the number of firms, only on the number of loyal customers. Essentially, the industry profits are the same that it would earn as if the shoppers paid marginal cost and the loyal customers paid the monopoly price, although that isn’t what happens in the industry, except in the limit as the number of firms goes to infinity. Note that this formula for industry profits does not work for a monopoly. To capture monopoly, one must set s = 0 because shoppers have no alternative under monopoly.

People who are price-sensitive and shop around convey a positive externality on other buyers by encouraging price competition. Similarly, people who are less price-sensitive and don’t shop around convey a negative externality on the other buyers. In markets with dispersed information about the best prices, where some buyers are informed and some are not, randomized prices are a natural outcome. That is, randomization of prices, and the failure of the law of one price, is just a reflection of the different willingness or ability to search on the part of consumers. 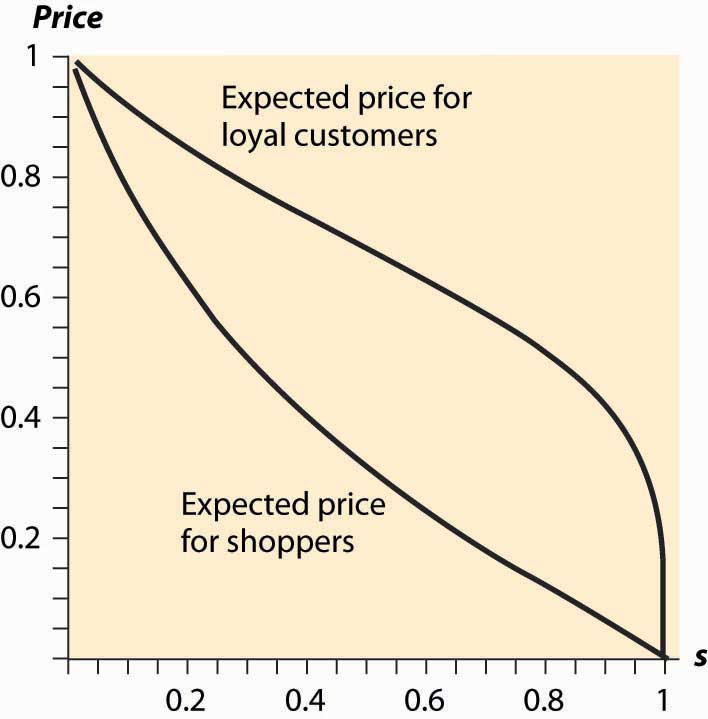 This difference in the willingness to search could arise simply because search is itself costly. That is, the shoppers could be determined by their choice to shop in such a way that the cost of shopping just balances the expected gains from searching. The proportion of shoppers may adjust endogenously to ensure that the gains from searching exactly equal the costs of searching. In this way, a cost of shopping is translated into a randomized price equilibrium in which there is a benefit from shopping and all consumers get the same total cost of purchase on average.