Popular culture is culture that is bought. Think about your daily life. You work to buy food and clothing, pay your rent, and entertain yourself. The origin of each ingredient in your food could be hundreds or even thousands of miles in either direction. Your clothing almost certainly wasn’t made locally, or even in this country. Your house might look just like any house in any subdivision in North America, placeless and with little connection to local resources.

Popular culture is driven by marketing. Entire industries exist to convince us that our desires and needs will be best met through shopping. Why is this? Because without sales, the companies that produce pop culture will go bankrupt.

Popular culture industries must continuously reinvent themselves. Being popular today is not a guarantee of longevity. In order to convince consumers that last year’s t-shirt is now unacceptable, it is necessary to promote fashion. Fashion is not just a concept related to clothing. It is the reason that automobile companies make cosmetic changes to their products every year. It is why fast food restaurants continually change some parts of their menus. Without the cachet of fashion, consumers may feel socially disadvantaged. This explains why some people with very limited incomes will spend money on expensive luxuries.

In terms of popular culture holidays are simply reasons to sell merchandise. The commercialization of Christmas has been increasing for over a century in western countries. Now it is possible to see Christmas displays in Japan or China, places with few Christians, but many available consumers. The same sort of marketing can be seen in the expansion of Halloween globally, and in the growth of Cinco de Mayo in the United States.

Hierarchical diffusion plays prominently in popular culture diffusion. Larger places tend to generate many of pop culture’s hit songs, clothing styles, and food trends. Diffusion in popular culture is highly related to technology. Although it wasn’t invented as such, the internet has become a venue for advertisement. Clickbait headlines and ad revenue have created an atmosphere where every conversation is a sales pitch.

This hierarchical diffusion means that innovations tend to diffuse from large, well-connected places to other large-well-connected places first, then trickle-down to smaller and smaller places. The gap in time that it takes for a new idea or product is known as cultural lag. In some places, there is almost no cultural lag. To very remote places, some innovations take a very long time to arrive. Bear in mind that there are places in the United states that still have no internet service.

Popular culture covers large populations with access to similar goods and services, but the pressing need to sell drives almost incessant modification, generally at a superficial level. Because of this we usually describe pop culture as stable across space, but highly variable across time.

The commodification of folk intoxicants mentioned earlier has had a decided effect on the modern world. Low alcohol beers have a minimal effect on the human body compared to commercial distilled spirits. The opium poppy, dangerous enough in its raw form, can be processed into heroin. The same can be said of coca (now used to produce cocaine) or tobacco. In folk form, these substances tended to be used for ritual purposes. In the context of popular culture, they are used in great quantity. Nevertheless, old folk patterns are still visible in the pop culture landscape. Italians still drink wine, a product they have produced for centuries, only now it might be bought from somewhere else. The Russian climate was good for producing grain and potatoes, which eventually was distilled into vodka.

Selling culture goes well beyond just food and clothing. Popular music and other forms of entertainment (video games, movies, etc.) are huge commercial entities marketing products well outside their places of origin. Movies made in the United States are often being made with the understanding that their international box office sales will be larger than their domestic sales. This is also true of other mass media products. These products are often related to other pop culture products. Companies rely on the familiarity consumers will have with a movie character in order to sell clothing, toys, video games, conventions and more movies in that series. When Marshall McLuhan wrote that “The medium is the message” he meant that television would be able to sell itself. The same expression could be expanded to pop culture in general.

The following graphic shows the top ten music charts for the week of September 10-16, 2017. Look closely at them. 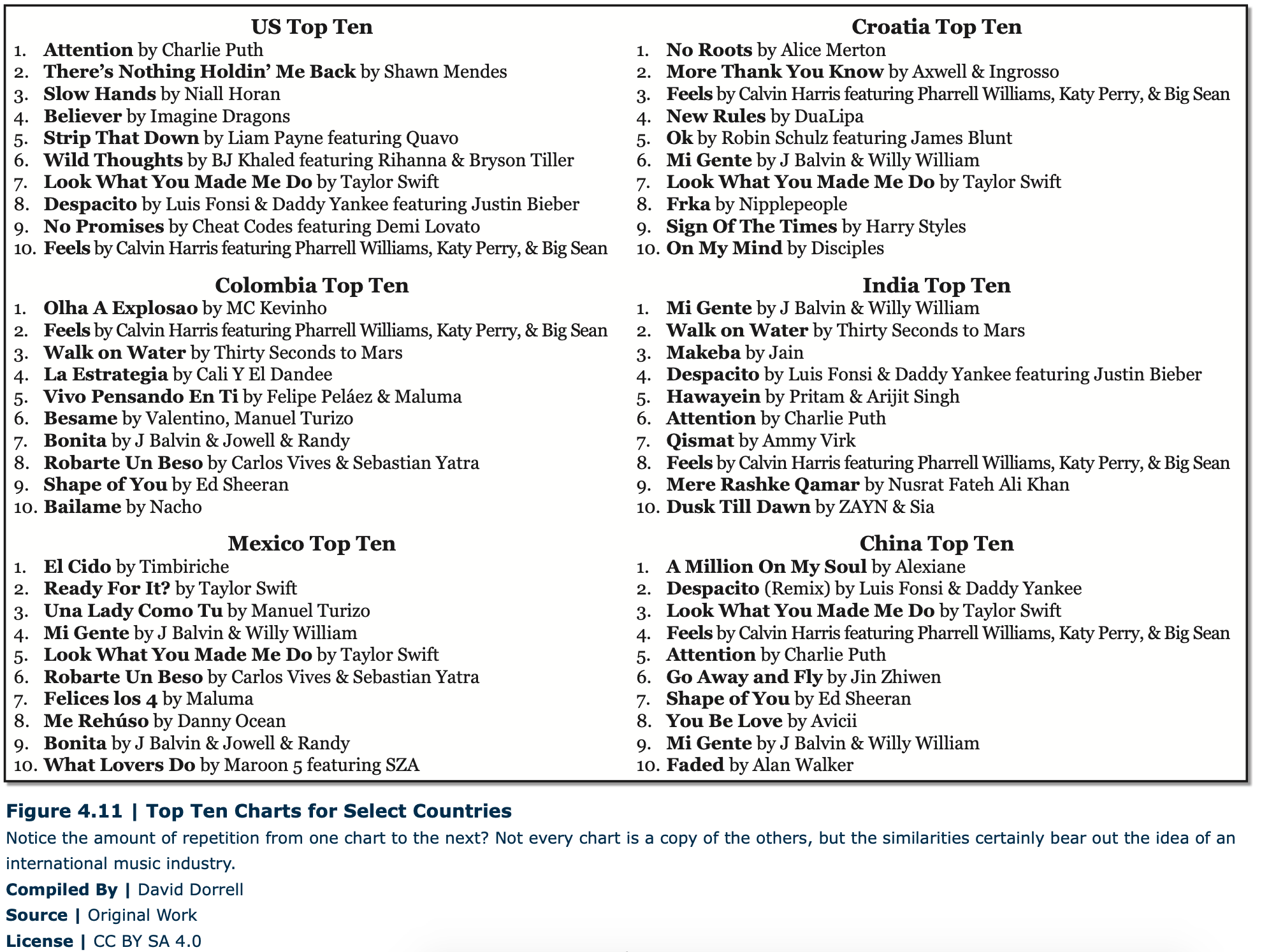