Farming is part of agribusiness as a complex political and economic system that organizes food production from the development of seeds to the retailing and consumption of the agricultural product. Although farming is just one stage of the complex economic process, it is incorporated into the world economic system of capitalism (globalized). Most farms are owned by individual families, but, in this context, many other aspects of agribusiness are controlled by large corporations. Consequently, this type of farming responds to market forces rather than to feeding the farmer. UsingVon Thünen’s isolate state model, which generated four concentric rings of agricultural activity, geographers explain that the choice of crops on commercial farms is only worthwhile within certain distances from the city. The effect of distance determines that highly perishable products (milk, fresh fruits, and vegetables) need to be produced near the market, whereas grain farming and livestock ranching can be located on the peripheral rings (Figure 10.23).

New Zealand, for example, is a particular case of a country whose agriculture was thrown into a global free market. More specifically, its agriculture has changed in response to the restructuring of the global food system and, at the same time, is responding to a new global food regime. For New Zealand to remain competitive, farmers have to intensify production of high added value or more customized products, also focusing on nontraditional exports such as kiwi, Asian pears, vegetables, flowers, and venison (meat produced on deer farms) (Figure 10.24). The New Zealand agricultural sector is unique in being the only developed country to be totally exposed to the international markets since the government subsidies were removed. 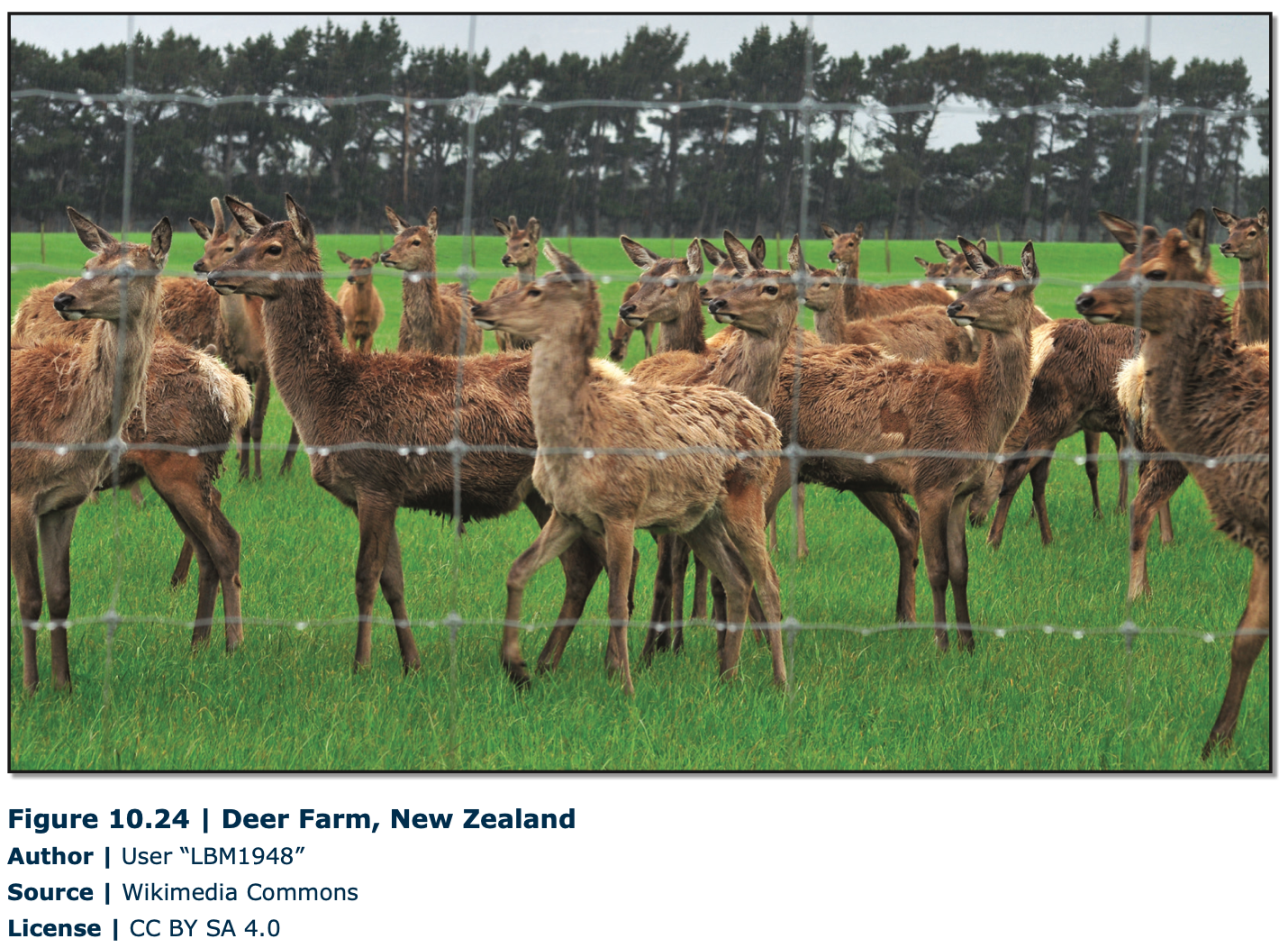 Since the 19th century, manipulation and management of biological organisms have been a key to the development of agriculture. In addition to Green Revolution, agriculture has also undergone a Biorevolution, involving agricultural biotechnology (agritech), an area of agricultural science involving the use of scientific tools and genetic engineering techniques to modify living organisms (or part of organisms) of plants and animals with the potential of outstripping the productivity increases of the Green Revolution and, at the same time, reducing agricultural production costs. Within the agricultural biotechnology process, desired traits are exported from a particular species of crop or animal to the different species obtaining transgenic crops, which possess desirable characteristics in terms of flavor, color of flowers, growth rate, size of harvested products, and resistance to diseases and pests (BT corn, for example, can produce its own pesticides).

By removing the genetic material from one organism and inserting it into the permanent genetic code of another, the biotech industry has created an astounding number of organisms that are not produced by nature. It has been estimated that upwards of 75 percent of processed foods on supermarket shelves – from soda to soup, crackers to condiments – contain genetically engineered ingredients. So far, little is known about the impacts of genetically modified (GM) foods on human health and the environment. Consequently, it is difficult to sort the benefits from the costs of their increasing incorporation into global food production. The United States is the leader not only for the number of the genetically engineered (GE) food crops but also for the largest areas planted with commercialized biotech crops. Many countries, in Europe, for example, consider that the genetic modification has not been proved safe, the reason for which they require all food to be labeled and refuse to import GM food. Yet, in the United States, genetic modification is permitted, taking into consideration that there is no evidence yet supporting that it is dangerous. Many people instead consider that they have the right to decide what they eat and, consequently, in their opinion, labeling of GM products must be mandatory. Protests against GMO regulatory structures have been very effective in many counties including the United States (Figure 10.25). 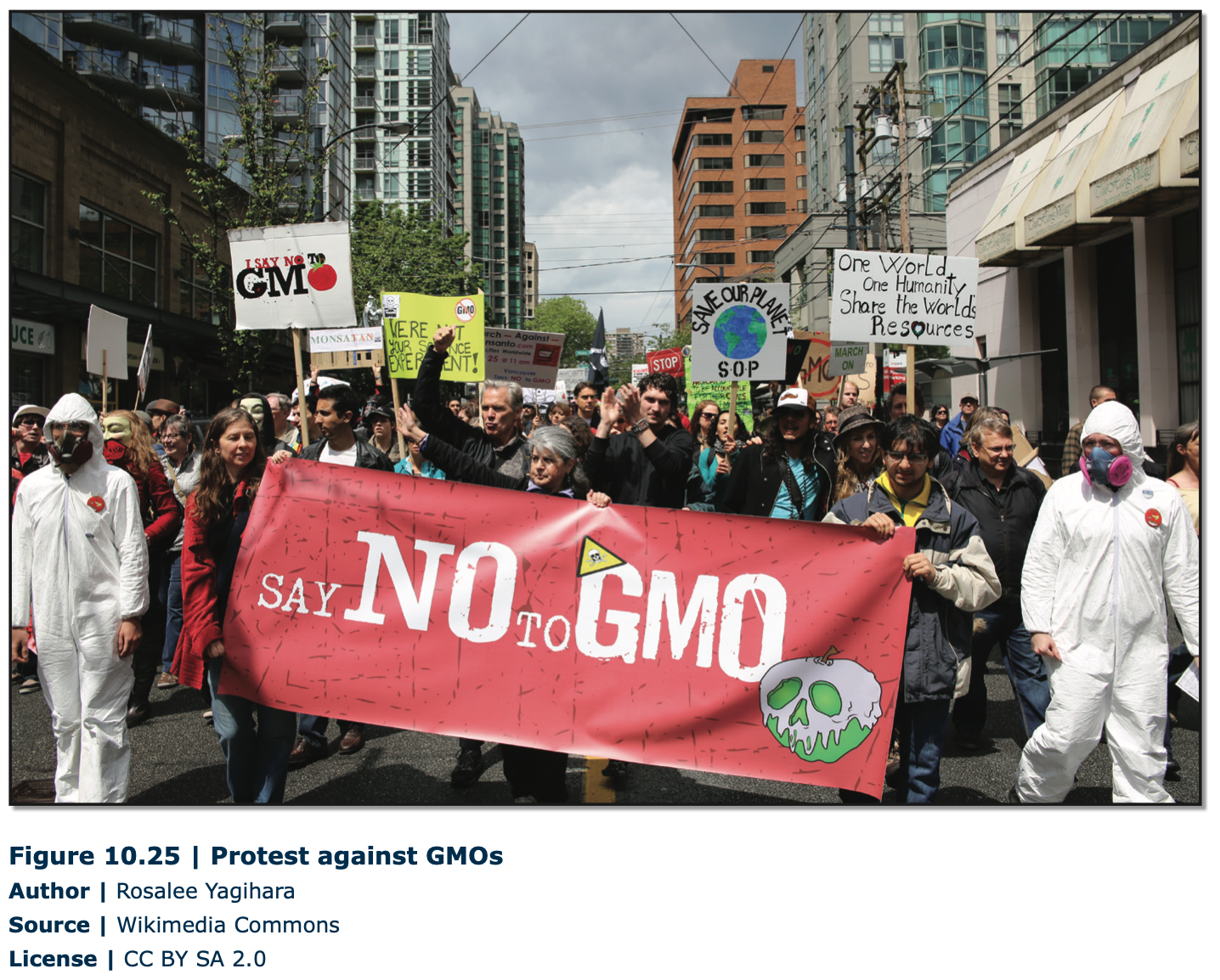 Currently, over 60 countries around the world require labeling of genetically modified foods, including the 28 nations in the European Union, Japan, Australia, Brazil, Russia, India, South Africa, China, and other countries (Figure 10.26). The debates regarding labeling certainly will continue. Since no one knows whether GM foods are entirely bad or entirely good, regulatory structures are crucial, protecting human health and the environment. Since the end of World War II, the world’s technically and economically feasible food production potential has significantly expanded. As a result, today, there is more than enough food to feed all the people on the Earth (Figure 10.27) Yet, the major issue is the access to food, which is uneven, the reason for which millions of individuals in both the core and the periphery are affected by poverty, preventing them from securing adequate nutrition.

Hunger, chronic (long-term) or acute (short-term), therefore, is one of the most pressing issues facing the world today. Chronic hunger, also known as undernutrition, is an inadequate consumption of the necessary nutrients and/ or calories. The Food and Agriculture Organization of the United Nations (FAO) considers necessary at least 1,800 kcal/day for an individual to consume in order to maintain a healthy life. The world average consumption is 2,780 kcal/day, but there is a significant difference between developed countries, with an average of 3,470 kcal/day (3,800 kcal/day in the U.S.), and developing countries, recording an average of 2,630 kcal/day (even less in sub-Saharan countries). FAO estimates that currently about 800 million people are undernourished globally, significantlyless than in the early 1990s, but the majority continue to be counted in southern Asia and sub-Saharan Africa (Figure 10.28). One form of hunger is famine, an acute starvation caused even by a population’s command over food resources, natural disasters (e.g., drought, Ethiopia in 1984-1985), or wars. In contrast, in North America, the United States especially, where the food is abundant and inspected for quality, overeating is a national problem, the reason for which the general condition of the population is reflected more by obesity (Figure 10.29). Nutritional vulnerability is conceptualized in terms of the notion of food security. According to FAO, food security exists when all people, at all times, have access to food for an active and healthy life. Related to food security is the concept of food sovereignty, which is the right of people, communities, and countries to define their own agricultural policies. One factor connected with food in general and food sovereignty especially is the fact that more cropland is redirected to raising biofuels, fuels derived from biological materials. They not only have a significant and increasing impact on global food systems but also result in evictions of small farmers and poor communities.

Alongside the emergence of a core-oriented food regime especially of fresh fruits and vegetables, a new orientation in agriculture is sustainability. According to the Sustainable Agriculture Initiative (SAI), “sustainable agriculture is the efficient production of safe, high quality agricultural products, in a way that protects and improves the natural environment, the social and economic conditions of farmers, their employees and local communities, and safeguards the health and welfare of all farmed species” (SAI Platform 2010- 2018) . More specifically, sustainability in agriculture is the increased commitment to organic farming, the principles and practices for sustainable agriculture developed by SAI being articulated around three main pillars: society, economy, and environment.

Although organic food production is not the primary mode of the agricultural practice, it has already become a growing force alongside the dominant conventional farming. Yet, unlike conventional farming, which promotes monoculture on large commercial farms and uses chemicals and intensive hormone-practices, organic farming, which puts small-scale farmers at the center of food production, does not use genetically modified seeds, synthetic pesticides, herbicides, or fertilizers. Thus, sustainable agricultural practices not only promote diversity and healthy food but also preserve and enhance environmental quality.