Industrial location is a balance between capital, material, and labor and markets. The goal is overall lowest cost. Sometimes pushing down one category, like labor, can increase other costs, like transportation. Substitution is possible across categories. For example, additional capital can replace labor through automation.

Earlier factories were built in cities in order to use the labor that was available there. Building in the middle of nowhere could have created an immediate labor shortage. Of course, labor will also migrate to places with available employment.

Some industrial activities are determined by site, the physical characteristic of a location. If you want to have a coal mine, it is probably a good idea to locate in a place that has coal. This is the most extreme form of restriction, but bear in mind that many places have mineral wealth, but not all of them are extracting that wealth right now. Many places that would otherwise be candidates for resource extraction are not currently being used because the resources cannot be extracted and sold for a profit. If the resource cannot make money, it will not be used. Remember that government subsidies can make some resources more profitable than they normally would be.

Other industrial locations are products of their situation. The maquiladoras that line the southern side of the Rio Grande (Rio Bravo in Mexico) border would not be there if the United States were not on the other side of the river. The proximity to the United States is the determining characteristic in the choice to locate there. Industries moved to Mexico because it appeared to make economic sense to do so. They were able to lower labor costs while remaining within the US/Canadian market. Transportations costs increased initially, but transportation costs overall have fallen due to more efficient methods of moving goods. Were the North American Free Trade Agreement (NAFTA) to be revoked the situation of Mexico would change, their access to the markets of the United States and Canada would diminish, and the factories that are there would have a much harder time selling their goods.

Classic economics lumped raw materials and energy under the category of land. Few companies bother to buy the land that produces a particular material, nor do they generally invest in power generation, or their own oil fields. Theseinputs are subject to the same price pressures as everything other part of the manufacturing process.

The land that a factory sits on has become less important over time. In earlier factories, most workers walked to work and factories were compelled to locate on expensive land in cities. That is no longer the case. Due to the widespreaddiffusion of the automobile, factories can be built in more suburban or even rural areas and workers will commute to the factory. This shifts part of the cost of securing labor onto the workers themselves. It lowers costs for the company. It is still necessary for the company to have access to the transport network, so new factories are usually built to take advantage of existing road networks, often next to interstates.

Sourcing materials has become global. Commodified inputs like steel are bought wherever they are relatively cheap and are shipped to where they are needed. Whichever source provider has the lowest cost, including shipping, will likely be chosen by the company. If you have ever bough something online, generally you want to know which company has the product with the lowest overall price. Companies operate the same way.

There are differences in energy costs across space. For energy intensive industrial activities, cheap energy is essential. China rose from producing very little steel a few decades ago to leading the world today. It this by leveraging low labor costs and a very cheap energy source- vast supplies of (highly-polluting) coal.

Labor costs can be reduced in a number of ways. One way is simply to pay the workers that you have less money. Workers, however do not like having their pay cut. Sending the work to a place with lower wages has been a common response to higher wages. A large portion of industrial labor requires minimal education. A company can choose to hire high school graduates in wealthy countries for a high wage or equivalently educated workers in poorer countries for far less. The labor pool has thus become globalized. Instead of competing for jobs with the other workers in a particular city, today’s workers are competing for jobs with much of the human population. Labor-intensive industries are particularly sensitive to labor costs. Clothing production has shifted to places with cheap labor as wages in developed countries have increased.

Besides the option of simply shipping jobs offshore, there is also the option of replacing workers outright. Most of the industrial jobs that have been lost in the United States in the last 30 years have not been to overseas production, they have been due to automation. Replacing people with machines is as old as industry itself. The difference now is that machines are much more capable than they were in the past and they are much cheaper. Referencing the earlier example of clothing manufacture, production of athletic shirts in the United States got a large boost with the introduction of a factory in Little Rock, Arkansas that relies on a robot called Sewbot. The factory will produce millions of shirts at very low costs ($.33 in labor per shirt). This low cost of labor renders in nearly negligible in importance compared to other factors, such as transporting the materials to the factory and transporting the finished clothes to market. The factory was built by a Chinese company in the center of the United States to minimize transport costs. More factories will likely migrate nearer their markets as the cost of labor becomes less important. Developed countries are already seeing an expansion of manufacturing, but not an expansion of manufacturing employment, due to the influence of automation.

An important contributor to geographic thinking regarding industrial locations was Alfred Weber (1868-1958). Weber took the concept of using lowest overall cost for the locations of industry and expanded it. He developed models that held many inputs to manufacturing constant in order to demonstrate the importance of transportation in determining least cost.

Weber believed that transportation costs were the most relevant factor in determining the location of an industry. The best way to minimize the cost of transport depends on the raw materials being transported. There are two kinds of raw material, things that are more-or-less everywhere (ubiquitous) and local raw materials. For the ubiquitous material (e.g. water), you have more freedom to locate, because it’s commonly available. In this case, you should build your facility near your market, then you won’t really need to transport much. We see examples of this in the locations of breweries and soft-drink manufacture.

On the other hand, if the material is only in a particular place (like bauxite), then you have some calculating to do. First you need to figure out if your manufacturing condenses, distills or otherwise shrinks your material. We call these processes bulk- reducing. If you aren’t doing that, but instead took small pieces and assembled them into something that was harder to transport (like a tractor) then it is called bulk-gaining. In order to minimize transport costs for bulk-reducing activities, you want to process them as close as possible to their extraction site. Examples of this are metal smelters and lumber mills.

Bulk-gaining processes are a little more complicated. You need to find the least cost point between your source materials (which may be numerous) and your market. Remember that the goal is overall lowest cost, so that involves many calculations to determine which is the cheapest location, meaning your location might be in between several your inputs and/or market. A general rule of this is that these sorts of businesses tend to be fairly close to their final markets.

There were two last considerations that Weber discussed, agglomeration and deagglomeration. Weber called them secondary factors, because they were less important than the previously mentioned characteristics. Agglomeration is related to the idea of economy of scale. Sometimes there are advantages to having similar industries near one another. Consider the manufacture of computers. Computer manufacturers don’t make their own components, they buy them, and they use similar tools to put them together, and they use similar labor, and so forth. When industries concentrate in a place they can share some resources and split the cost. This is not to say that this is a conscious process, in many instances it just develops on its own. Degglomerative factors produce diseconomies of scale and are responsible for redistribution of industry. Examples of this could be escalating prices for land or labor which drive production away from an area.

Containerization has greatly changed the nature and cost of transportation. In the past, transporting goods required large numbers of people to move goods around. People loaded and unloaded goods at break-of-bulk points. Break-of- bulk points were places like railroad terminals, where goods were loaded onto trains, or ports, where goods were loaded into ships. Break-of-bulk points had large numbers of people loading and unloading items. Containerization changed that process tremendously. Goods are now packed into large metal boxes, then the bokes are moved from point to point. Cranes move the boxes from trucks to trains to ships, then reverse the process the process at the shipping destination. Intermodal transportation assumes that a container will seamlessly be transported by any number of different shipping methods. The number of people necessary to ship goods plummeted. The speed at which goods moved increased tremendously, since the bottlenecks were removed from the system. Containerization is a good example of an innovation that did not require a large technological shift, it simply required rationalizing a system that was labor intensive. Logistics, the commercial activity of transporting goods, is the glue that holds the global production network together. Without relatively inexpensive shipping, many offshored industries would not be able to make goods in distant factories, ship them to other places, and still make a profit. 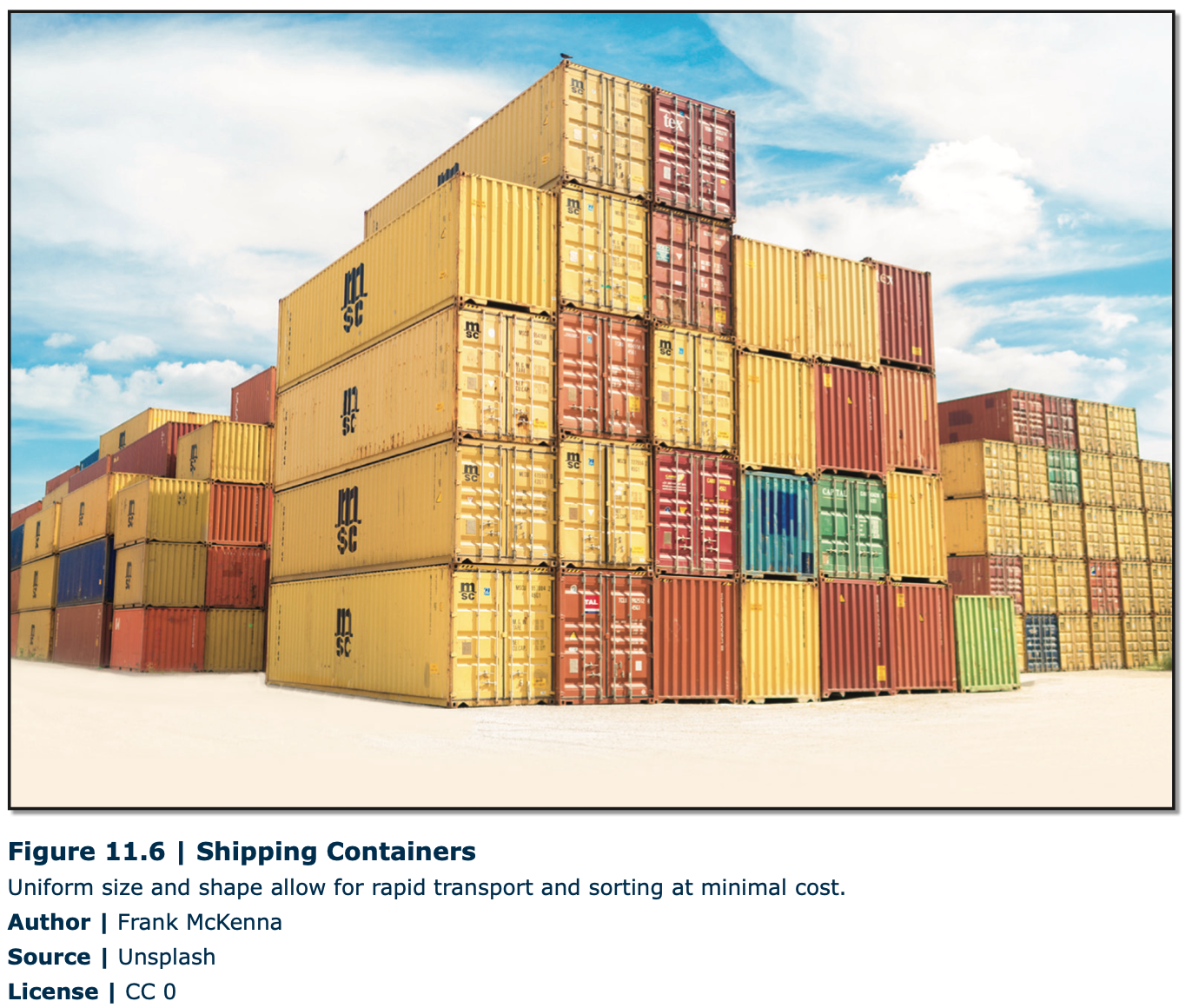 Operating an industry has more costs than materials, labor, and shipping. Other factors such as taxes, regulatory compliance, and financial incentive packages can either attract of repel manufacturing. These factors increased tremendously in importance. It has become possible for many industries to ignite a “bidding war” in order to secure increasingly advantageous incentives to locate in a particular place. Tax breaks, construction allowances and other benefits will be paid by the places that desperately struggle to attract industries. This has triggered what has beendescribed as a race for the bottom as places promise more than they can afford in the hopes of securing outside investment.

Another consideration is access to capital. Businesses often need investment funds, or short-term credit. Being unable to secure capital prevents many businesses in developing countries from starting or continuing. Countries without banking infrastructure find it nearly impossible to raise sufficient money to develop their own industries. Companies in countries like this are forced to hunt for financial backing in other countries.

Industries have large sunk costs. Corruption can take advantage of this to demand bribes, protection money, or other expenses that siphon off profit. High levels of corruption inhibit investment. Industries are risk averse. Places that arepolitically unstable will also have difficulty industrializing, since companies will be reluctant to build in places where any investment could be lost in a revolution or other political violence. This doesn’t mean that industry requires representative government. Many places have experienced tremendous economic development without democracy. It just means that companies have to feel that any money that they invest in a place is safe.