Fossil fuel resources are finite, so efforts to seek other types of energy resources are ongoing in many countries around the world. Because fossil fuels are not limitless, some researchers are concerned that supply will eventually exceed demand, particularly as developing countries increase economically and technologically. Moreover, as we will see in a later section on pollution, the emissions from the burning of fossil fuels are a serious concern for the global atmosphere, and clean energy is seen as a better alternative to coal, oil, and natural gas.

The shift away from fossils fuels involves a number of different types of renewable energy and alternative energy sources. Renewable resources are those that are in infinite supply. Major types of renewable energy include solar,wind, hydroelectric power, biofuels, and geothermal energy. Although the risks are considered to be significant, an alternative energy source is nuclear power, but nuclear power is not renewable as it depends on the supply of uranium. Significant efforts worldwide to harness these energy sources can be seen in many regions of the world.

For example, in Europe, a concerted effort to fund renewable energy projects has been underway since the 1990s. In 2016, wind energy overtook coal as the second largest form of power production (after natural gas) in Europe, and 80 percent of new energy projects were from renewable energy sources. France, Ireland, Lithuania, the Netherlands, and Finland all set records for windfarm installation, while Germany continues to lead in wind power. Norway and Sweden are the leading countries overall in terms of renewable energy consumption in Europe, as more than half of their energy consumption is from renewables (Figure 13.1).

In Asia, while China continues to build many coal-powered plants, it is investing hundreds of billions of dollars on renewable energy, more money than the United Kingdom, the United States, and Japan, combined. This development is important as China is the world’s largest emitter of greenhouse gases, and this pollution may contribute to global warming. Moreover, China is already the world leader in wind power and plans to build the largest solar farm on the planet. India’s goal is to produce over 50 percent of its power from renewable energy by 2027. All of these efforts require a considerable amount of capital investment to help cover the costs of the energy transformation. In the Middle East, even the world leader in oil production, Saudi Arabia, is looking toward renewable energy as they are expected to be a net importer of oil by 2038 as their domestic supplies dwindle. The Middle East is an excellent location for solar power because of the number of cloud-free days in a year.

In the United States, only about 12 percent of energy production is from renewables, and much of that production is from hydroelectric power. However, America has some of the largest wind and solar farms in the world. Texas leads in wind power production, and California has the most solar energy generating capacity (Figure 13.2). Efforts to promote electric car use have also been promoted in California, as the state government has set a goal of having 1.5 million electric cars on the road by 2025. Although using a battery to power a car instead of fossil fuels is generally environmentally friendly, electricity generated primarily from fossil fuels is still used to charge the vehicles.

One of the more controversial types of renewable energy is biofuels. Biofuels produce energy from living matter, and much of the biofuel used in the world is from a variety of crops such as corn, cassava, sweet potato, sugar cane, and sorghum. The United States and Brazil lead the world in biofuel production, followed by China. In the United States, most gasoline has a certain percentage of ethanol, derived from corn. The major controversy with biofuels stems from the fact that many of the plants used for biofuels could also be used to feed people, so whether or not using scarce land to produce fuel as opposed to food is a good idea is hotly debated. However, other biofuel sources exist besides agricultural crops, and these biofuels include bio-methane and even bacteria such as E. coli. In the United States, India, and Germany, methane derived from cow manure and decaying plant matter is used to power electric plants. In Gwinnett County, Georgia, methane extracted during the wastewater treatment process is used to provide electric power for the wastewater treatment process (Figure 13.3). 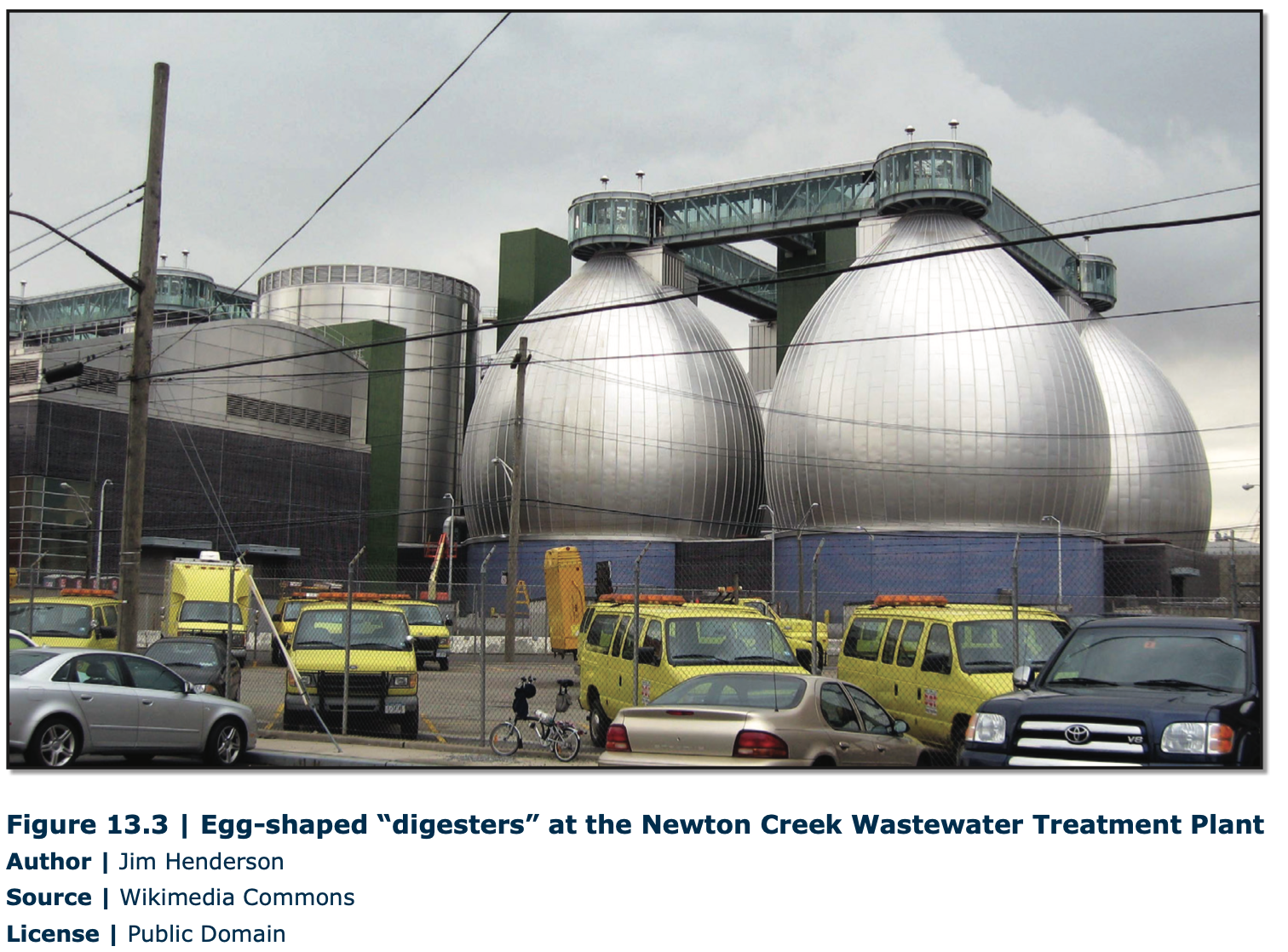