Social class is associated with individuals’ religious affiliations and practices but not with religiosity itself.

Social class, measured by socioeconomic status, is associated with individuals’ religious affiliations and practices. This affiliation has more to do with how religion is practiced rather than degree of religiosity. Members of lower classes tend to be affiliated with more fundamentalist religions and sect-like groups. Members of the middle class tend to belong to more formal churches. For example, American Presbyterians and Episcopalians (two highly formal Protestant denominations), tend to have above average socioeconomic statuses. Methodists and Lutherans (two moderately formal Protestant denominations) tend to have about average SES. Baptists and members of Protestant fundamentalist sects (which tend to be decentralized and informal) have below average SES. Variations in SES across denomination reveal a correlation between religious affiliation and social class.

Social class is not significantly correlated to religiosity, an index of how strongly religious a person is. Religiosity is measured by tracking frequency of church attendance, church group involvement, frequency of prayer, and other such markers of strength of religious practice. Members of each social class show a range of religiosity.

On the other hand, income, and therefore social class, is related to an individual’s denomination. When one looks at average income by religion, there are clear differences. The highest-earning religion on average is Judaism, with an average income of $72,000 in 2000. This is dramatically higher than average; the next highest-earning denomination is Unitarianism at $56,000. Jehovah’s Witness, Church of God, and Seventh Day Adventists are at the bottom of the income distribution, with $24,000, $26,000, and $31,000 respectively. 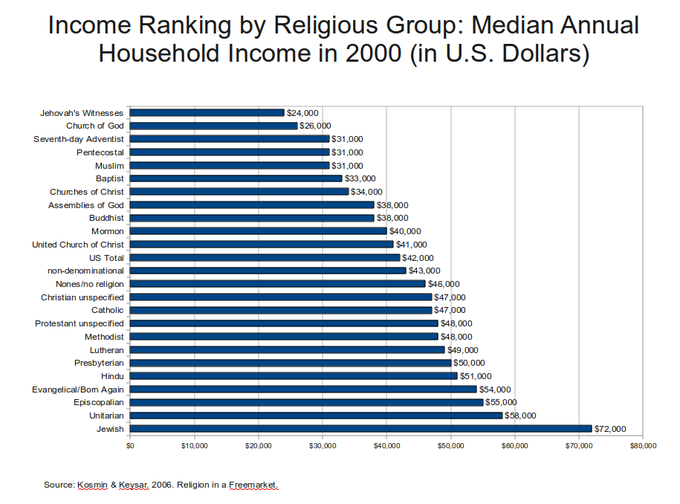 Religion is also linked with education. 72% of Unitarian and 67% of Hindu adherents are college graduates, while only 12% of Jehovah’s Witness and 15% of Church of God members graduated from college.