The working class consists of individuals and households with low educational attainment, low status occupations, and below average incomes.

Working class is a term used in the social sciences and in ordinary conversation to describe those employed in lower tier jobs (as measured by skill, education, and income), often extending to those who are unemployed or otherwise earning below-average incomes. Working classes are mainly found in industrialized economies and in the urban areas of non-industrialized economies.

In the United States, the parameters of the working class remain vaguely defined and are contentious. Since many members of the working class, as defined by academic models, are often identified in the vernacular as being middle class, there is considerable ambiguity over the term’s meaning. In the class models devised by sociologists, the working class comprises between 30 percent and 35 percent of the population, roughly the same percentage as the lower middle class. Those in the working class are commonly employed in low-skilled occupations, including clerical and retail positions and blue collar or manual labor occupations. Low-level, white-collar employees are sometimes included in this class, such as secretaries and call center employees.

Education, for example, can pose an especially intransigent barrier in the United States. Members of the working class commonly have only a high school diploma, although some may have minimal college courses to their credit as well. Due to differences between middle and working-class cultures, working-class college students may face “culture shock” upon entering the post-secondary education system, with its “middle class” culture. Research showing that working-class students are taught to value obedience over leadership and creativity can partially account for the difficulties that many working-class individuals face upon entering colleges and universities. 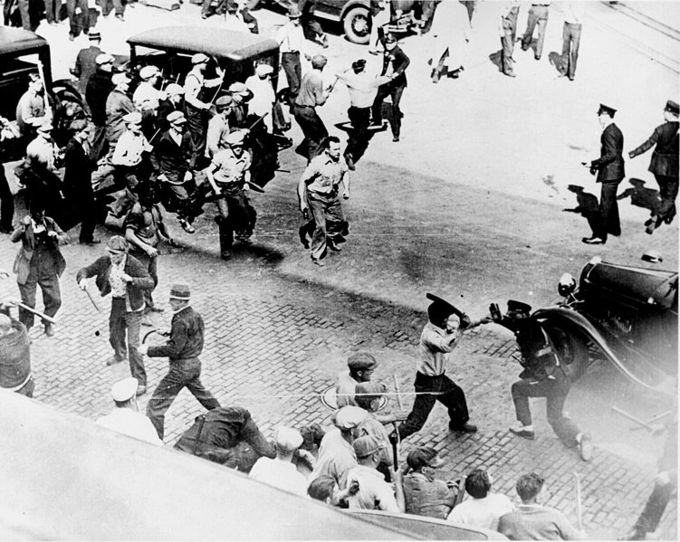 Battle Strike: Class War: Workers battle with the police during the Minneapolis Teamsters Strike of 1934.