In the previous section, we explored the mechanisms of biological variation and evolution at the most fundamental level - cells and DNA. In this section, we are going to look at how genetics functions for individuals. This field of genetics is often called Classical or Mendelian Genetics. It focuses on how various traits are passed from one individual to the next.

These are either/or traits (they usually have 2 phenotypes):

They are biologically (genetically) determined:

There are approximately 4000 traits identified as discrete or simple traits of inheritance. Some additional examples include: The opposite of this, where one gene has multiple effects, is called pleiotropy.

Due to the large role that the environment plays in complex traits, we have a statistical concept in genetics called heritability. Heritability is the proportion of the total variation observed in the population that can be attributed to genetics rather than to the environment.

Gregor Mendel and his Peas

For simple traits, it is easy to trace patterns of inheritance and use them to show how traits are passed on from one generation to the next. Charles Darwin thought that traits were passed down by "blending": each parent contributes equally to the offspring, and these contributions are mixed together and then halved at each successive generation (Figure \(\PageIndex{2}\)).

However, there was a contemporary of his that Darwin didn't know about, a monk named Gregor Mendel (pictured below), who figured out something important about simple traits and genes. Mendel is famous for a series of experiments that he completed with pea plants (between about 1856 and 1868) and the paper that he wrote about it (Experiments with Plant Hybrids). Unfortunately, despite the fact that Mendel published this work in 1865, it was relatively unknown until 1900. What he concluded was that genetic information is inherited in discrete units (he called them "factors", we call them "genes"). His work demonstrated that inheritance is non-blending or "particulate". He also noted that when one selectively bred the plants with the various traits together, he could predict the ratios of offspring characteristics. For example, he noticed that when he bred pure-bred plants with violet flowers with those with white flowers, the first generation (F1) all had violet flowers. If blending inheritance was functioning, one would expect all of the flowers to be a pale violet, halfway between the original violet and white.

Then when he took those F1 violet-flowered plants and bred them together, the second generation (F2) had a ratio of 3:1 violet to white flowers (there were still no pale-violet hybrids). This phenomenon was consistent across the pea plants' other six traits.

He determined that this is what was going on: This diagram in Figure \(\PageIndex{5}\) is called a Punnett square (after an early 20th c. English geneticist named Reginald Punnett). They're really pretty simple to construct. One just puts the alleles of each parent (one parent on the top and the other down the side) and then you fill in the boxes of what the offspring will be. In order to devise the ratios of the various genotypes and phenotypes, just count the number of boxes of each.

For further information on how to construct Punnett squares, go here or watch this video from Bozeman Science.

Mendel's very thorough experiments (some estimates say that he bred approximately 29,000 pea plants) lead him to write these four postulates.

Some examples of inheritance patterns in humans There are three types: 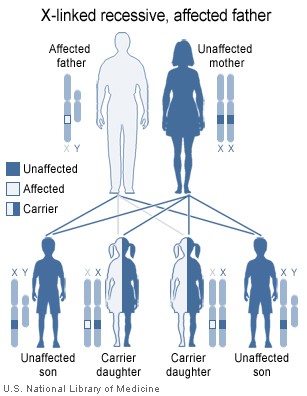 Red-green colorblindness and Hemophilia A