Ethology is the study of animal behavior. Don't confuse it with "ethnology" the study of "ethnos", ethnicities, the comparative study of human cultures. I think videos are the best way to get a sense of both primate behavior and our place in the primate continuum. Captivity is a bad place to study behavior because the behavior has evolved in a certain environment, to solve problems in that environment, and you can't expect to see natural behavior outside of a natural setting, and I hate zoos because they justify the destruction of natural habit. But, some of these psychological experiments are useful to blur the line between human and non-human primate.

Watch Chimpanzee's from Bossou tool use

Apes don't speak but they can learn sign language and symbolic keyboard languages. Book on Koko, a gorilla who was taught sign language

Language is often defined as an exclusively human form of communication, but the line between human language and animal communication is not so sharp, as we see with Koko, Kanzi, and the dozens of other apes taught to use languages. Can the same be said about music? Gorillas make up little songs when they are eating. When we find regional variations of sounds produced by chimps, can we say they are like musical styles?

Watch Chimpanzee's from Bossou clip leaves because they like the sound it makes, and they are bored, frustrated, or want to attract a mate (you need to turn the sound up on the video to hear it)

Theory of mind refers to an individual's ability to think about what other individuals are thinking. The term has various definitions which can range from mirroring, copying another's actions, to mentalizing, predicting how another will react. Humans are definitely the best at this, but other animals demonstrate this behavior, including dogs, dolphins, elephants, some birds, and of course primates. Dogs are actually better at recognizing human pointing than chimpanzees.

* John Rubin "The Gap Between Humans and Apes"

Watch a lecture by Tetsuro Matsuzawa, "Mind Reading" in Chimpanzees

Skim Charles Darwin's1872 "The Expressions of the Emotions in Man and Animals", especially look at the pictures: 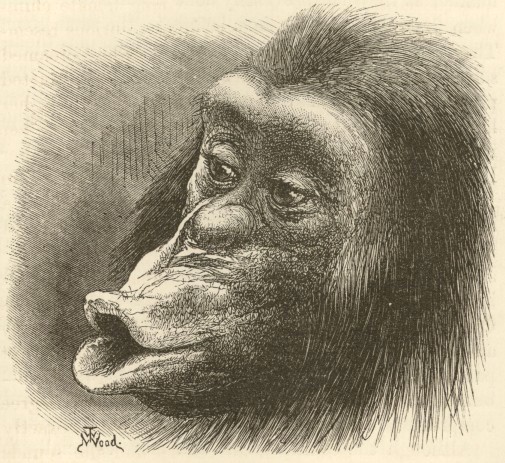 Read an article on contagious yawning in chimpanzees

Read an article on Chimp attitudes towards death

The three clips are arranged from agonistic (aggression) to affiliative (grooming and sex).

Agonistic means "aggressive", but it is usually more bluff and intimidation than physical violence. Natural selection is going to generally select for conflict resolution that avoids members of the same species injuring each other. Many primates are aggressive, but they don't kill each other very often. They learn hierarchies to avoid injury. But when push comes to shove, primates make bad pets.

Affiliative means "social". There is a push and pull of conflict and resolution in primate societies. Primates fight to see who's on top, and then make-up to keep the group together. Agonistic behavior helps to establish dominance hierarchies, and is usually followed by reconciliation, a kind of affiliative behavior. The most common primate affiliative behavior is grooming. We tend to think of grooming as keeping clean, but its main function for primates is social bonding.

If you say something is r-selected or K-selected, you are comparing a species or group of species to another, and comparing their strategies for growing their population. The terms come from variables in a math equation that describes how populations grow: