Money is any object that is generally accepted as payment for goods and services and the repayment of debt.

Money is any object that is generally accepted as payment for goods and services and repayment of debts in a given socioeconomic context or country. Money comes in three forms: commodity money, fiat money, and fiduciary money.

Many items have been historically used as commodity money, including naturally scarce precious metals, conch shells, barley beads, and other things that were considered to have value. The value of commodity money comes from the commodity out of which it is made. The commodity itself constitutes the money, and the money is the commodity. Commodity Money: Conch shells have been used as commodity money in the past. The value of commodity money is derived from the commodity out of which it is made. Image used with permission (CC BY-SA 3.0; ChildofMidnight.

Fiat money is money whose value is not derived from any intrinsic value or guarantee that it can be converted into a valuable commodity (such as gold). Instead, it has value only by government order (fiat). Usually, the government declares the fiat currency to be legal tender, making it unlawful to not accept the fiat currency as a means of repayment for all debts. Paper money is an example of fiat money.

Most modern monetary systems are based on fiat money. However, for most of history, almost all money was commodity money, such as gold and silver coins.

Money has three primary functions. It is a medium of exchange, a unit of account, and a store of value:

Economists sometimes note additional functions of money, such as that of a standard of deferred payment and that of a measure of value. A “standard of deferred payment” is an acceptable way to settle a debt–a unit in which debts are denominated. The status of money as legal tender means that money can be used for the discharge of debts. Money can also act a as a standard measure and common denomination of trade. It is thus a basis for quoting and bargaining prices. Its most important usage is as a method for comparing the values of dissimilar objects.

The Functions of Money

The monetary economy is a significant improvement over the barter system, in which goods were exchanged directly for other goods.

Barter is a system of exchange in which goods or services are directly exchanged for other goods or services without using a medium of exchange, such as money. The reciprocal exchange is immediate and not delayed in time. It is usually bilateral, though it can be multilateral, and usually exists parallel to monetary systems in most developed countries, though to a very limited extent. The barter system has a number of limitations which make transactions very inefficient, including:

Barter: In a barter system, individuals possessing something of value could exchange it for something else of similar or greater value.

Despite the long list of limitations, the barter system has some advantages. It can replace money as the method of exchange in times of monetary crisis, such as when a the currency is either unstable (e.g. hyperinflation or deflationary spiral) or simply unavailable for conducting commerce. It can also be useful when there is little information about the credit worthiness of trade partners or when there is a lack of trust.

The money system is a significant improvement over the barter system. It provides a way to quantify the value of goods and communicate it to others. Money has several defining characteristics. It is:

The use of money as a medium of exchange has removed the major difficulty of double coincidence of wants in the barter system. It separates the act of sale and purchase of goods and services and helps both parties in obtaining maximum satisfaction and profits independently.

M1 captures the most liquid components of the money supply, including currency held by the public and checkable deposits in banks.

M1 is the narrowest measure of the money supply, including only money that can be spent directly. More specifically, M1 includes currency and all checkable deposits. Currency refers to the coins and paper money in the hands of the public. Checkable deposits refer to all spendable deposits in commercial banks and thrifts. M1: The M1 measure includes currency in the hands of the public and checkable deposits in commercial banks.

A broader measure of money than M1 includes not only all of the spendable balances in M1, but certain additional assets termed “near monies”. Near monies cannot be spent as readily as currency or checking account money, but they can be turned into spendable balances with very little effort or cost. Near monies include what is in savings accounts and money-market mutual funds. The broader category of money that embraces all of these assets is called M2. M3 encompassed M2 plus relatively less liquid near monies. In practice, the measure of M3 is no longer used by the Federal Reserve.

Imagine that Laura deposits $900 in her checking account in a world with no other money (M1=$900). The bank sets 10% of the amount aside for required reserves, while the remaining $810 can be lent out by the bank as credit. The M1 money supply increases by $810 when the loan is made (M1=$1,710). In the meantime, Laura writes a check for $400. The total M1 money supply didn’t change; it includes the $400 check and the $500 left in the checking account (M1=$1,710). Laura’s check is accidentally destroyed in the laundry. M1 and her checking account do not change, because the check is never cashed (M1=$1,710). Meanwhile, the bank lends Mandy the $810 credit that it has created. Mandy deposits the money in a checking account at another bank. The bank must keep 10% as reserves and has $729 available for loans. This creates promise-to-pay money from a previous promise-to-pay, inflating the M1 money supply (M1=$2,439). Mandy’s bank now lends the money to someone else who deposits it in a checking account at another bank, and the process repeats itself.

M2 is a broader measure of the money supply than M1, including all M1 monies and those that could be quickly converted to liquid forms.

There is no single “correct” measure of the money supply. Instead there are several measures, classified along a continuum between narrow and broad monetary aggregates. Narrow measures include only the most liquid assets, the ones most easily used to spend (for example, currency and checkable deposits). Broader measures add less liquid types of assets (certificates of deposit, etc.). The continuum corresponds to the way that different types of money are more or less controlled by monetary policy. Narrow measures include those more directly affected and controlled by monetary policy, whereas broader measures are less closely related to monetary policy actions.

The different types of money are typically classified as “M”s. Around the world, they range from M0 (the narrowest) to M3 (broadest), but which of the measures is actually the focus of policy formulation depends on a country’s central bank.

M2 is one of the aggregates by which the Federal Reserve measures the money supply. It is a broader classification of money than M1 and a key economic indicator used to forecast inflation. M2 consists of all the liquid components of M1 plus near-monies. Near monies are relatively liquid financial assets that may be readily converted into M1 money. More specifically, near monies include savings deposits, small time deposits (less than $100,000) that become readily available at maturity, and money market mutual funds. Federal Reserve: Historically, the Federal Reserve has measured the money supply using the aggregates of M1, M2, and M3. The M2 aggregate includes M1 plus near-monies.

Other Measurements of the Money Supply

In addition to the commonly used M1 and M2 aggregates, several other measures of the money supply are used as well.

In addition to the commonly used M1 and M2 aggregates, there are several other measurements of the money supply that are used as well. More specifically: 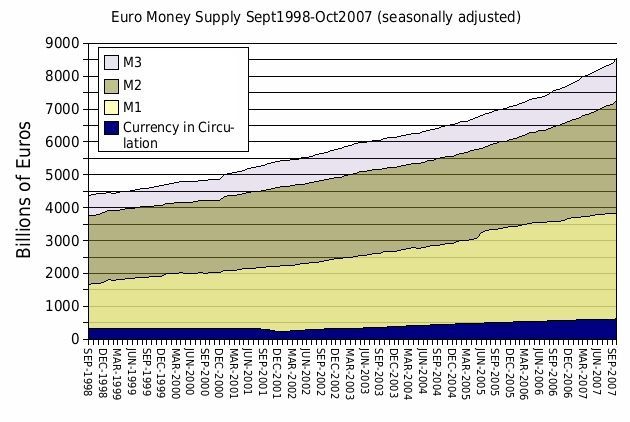 Euro Money Supply: The measures of the money supply are all related, but the use of different measures may lead economists to different conclusions.