Exports: The Economic Impacts of Selling Goods to Other Countries

Exporting is a form of international trade which allows for specialization, but can be difficult depending on the transaction.

Exports: The map shows the primary exporters for countries around the globe. The colors indicate the leading merchandise export destination for the indicated country (the United States main export destination is the European Union). Exporting is the act of shipping goods and services to other countries.

In order to protect exports, commercial goods are subject to customs authorities for both the exporting and importing countries. Legal restrictions and trade barriers are in place internationally to control trade, whether goods are being exported or imported. When legal restrictions and trade barriers are lessened or lifted the producer surplus increases and so does the amount of the goods and services that are exported to other countries.

Exporting goods and services has both advantages and disadvantages for countries involved in international trade.

Exporting allows a country’s producers to gain ownership advantages and develop low-cost and differentiated products. It is viewed as a low-risk mode of production and trade. Exporters also experience internationalization advantages which are the benefits of retaining a core competence within a company and threading it through the value chain instead of obtaining a license to outsource or sell the goods or services.

Imports: The Economics Impacts of Buying Goods from Other Countries

Imports are critical for many economies; they are the defining financial transactions of international trade and account for a large portion of the GDP.

Imports are defined as purchases of good or services by a domestic economy from a foreign economy. The domestic purchaser of the good or service is called an importer. Imports and exports are critical for many economies and they are the defining financial transactions of international trade.

Due to the economic importance of imports, countries enact specific laws, barriers, and policies in order to regulate international trade. Protectionism is the economic policy of restraining trade between countries through tariffs on imported goods, restrictive quotas, and government regulations. When trade barriers and policies of protectionism are eliminated, consumer surplus increases. The price of a good or service will decrease while the quantity consumed will increase.

On a national level, in most countries international trade and importing goods represents a significant share of the gross domestic product (GDP). International trade has a significant economic, social, and political importance in many countries. Imports provide countries with access to goods and services from other nations. Without imports, a country would be limited to the goods and services within its own borders.

Imports: The map shows the largest importers on an international scale. The color indicates the leading source of merchandise imports for the indicated country (the United States’ imports the largest percentage of its goods from China). Imports account for a significant share in the gross domestic product (GDP) of a country.

International trade is generally less expensive than domestic trade despite additionally imposed costs, taxes, and tariffs. However, the factors of production are usually more mobile domestically than internationally (capital and labor). It is common for countries to import goods rather than a factor of production. For example, the U.S. imports labor-intensive goods from China. Instead of importing Chinese labor, the U.S. imports goods that were produced in China by Chinese labor.

On a business level, companies take part in direct-imports, which occur when a major retailer imports goods that are designed locally from an overseas manufacturer. The direct-import program allows the retailer to bypass the local supplier and purchase the final product directly from the manufacturer. Direct imports save retailers money by eliminating the local supplier.

Free trade is a policy where governments do not discriminate against imports and exports; creates a large net gain for society.

Free trade is a policy where governments do not discriminate against exports and imports. There are few or no restrictions on trade and markets are open to both foreign and domestic supply and demand.

Free trade is beneficial to society because it eliminates import and export tariffs. Restricted trade affects the welfare of society because although producers experience increases in surplus and additional revenue, the loss faced by consumers is greater than any benefit obtained. When a country trades freely with the rest of the world, it should theoretically produce a net gain for society and increases social welfare. Free trade policies consist of eliminating export tariffs, import quotas, and export quotas; all of which cause more losses than benefits for a country. With free trade in place, the producers of the exported good in exporting countries and the consumers in importing countries all benefit. 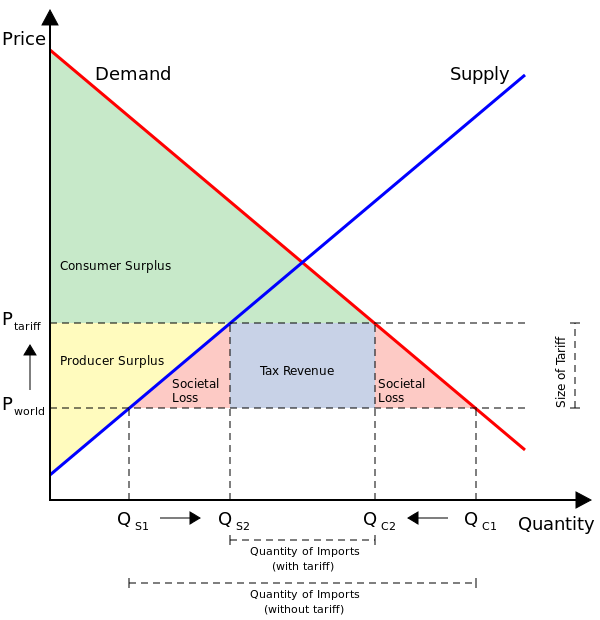 Tariffs: This image shows what happens to societal welfare when free trade is not enacted. Tariffs cause the consumer surplus (green area) to decrease, while the producer surplus (yellow area) and government tax revenue (blue area) increase. The amount of societal loss (pink area) is larger than any benefits experienced by the producers and government. Free trade does not have tariffs and results in net gain for society.

One of the main disadvantages is the selective application of free trade. Economic inefficiency can be created through trade diversion. It is economically efficient for a good to be produced in the country with the lowest production costs. However, this does not always occur if a high cost producer has a free trade agreement and the low cost producer does not. When free trade is applied to only the high cost producer it can lead to trade diversion to not the most efficient producer, but the one facing the lowest trade barriers, and a net economic loss. Free trade is highly effective and provides society with a net gain, but only if it is applied.

Due to industry specializations, many workers are displaced and do not receive retraining or assistance finding jobs in other sectors. The nature of industries and trade increases economic inequality. As a result of unskilled workers the wages within the various industries may decline.

Another disadvantage is that by increasing returns to scale, can cause certain industries to settle in an geographically area where there is not comparative advantage. Despite this disadvantage, the level of output that is generated by free trade for both the “winner” and the “loser” is increased substantially.

The Results of Free Trade

Economists have studied free trade extensively and although it creates winners and losers, the main consensus is that free trade generates a large net gain for society. In a 2006 survey of American economists, it was found that 85.7% believed that the U.S. should eliminate any remaining tariffs and trade barriers. Economists professor N. Gregory Mankiw explained that, “few propositions command as much consensus among professional economists as that open world trade increases economic growth and raises living standards.”