Competitive theory studies price-taking consumers and firms—that is, people who can’t individually affect the transaction prices. The assumption that market participants take prices as given is justified only when there are many competing participants. We have also examined monopoly, precisely because a monopoly, by definition, doesn’t have to worry about competitors. Strategic behavior involves the examination of the intermediate case, where there are few enough participants that they take each other into account—and their actions individually matter—so that the behavior of any one participant influences choices of the other participants. That is, participants are strategic in their choices of action, recognizing that their choices will affect choices made by others.

The right tool for the job of examining strategic behavior in economic circumstances is game theory, the study of how people play games. Game theory was pioneered by the mathematical genius John von Neumann (1903–1957). Game theory has also been very influential in the study of military strategy; and, indeed, the strategy of the cold war between the United States and the Soviet Union was guided by game-theoretic analyses.An important reference for game theory is John von Neumann (1903–1957) and Oskar Morgenstern (1902–1977), Theory of Games and Economic Behavior (Princeton, NJ: Princeton University Press, 1944). Important extensions were introduced by John Nash (1928–), the mathematician made famous by Sylvia Nasar’s delightful book, A Beautiful Mind (Simon & Schuster, 1998). Finally, applications in the military arena were pioneered by Nobel laureate Thomas Schelling (1921–), The Strategy of Conflict (Cambridge: Cambridge University Press, 1960).

The theory provides a description that fits common games like poker or the board game Monopoly, but will cover many other situations as well. In any game, there is a list of players. Games generally unfold over time; at each moment in time, players have information—possibly incomplete—about the current state of play and a set of actions they can take. Both information and actions may depend on the history of the game prior to that moment. Finally, players have payoffs and are assumed to play in such a way as to maximize their anticipated payoff, taking into account their expectations for the play of others. When the players, their information and available actions, and payoffs have been specified, we have a game. 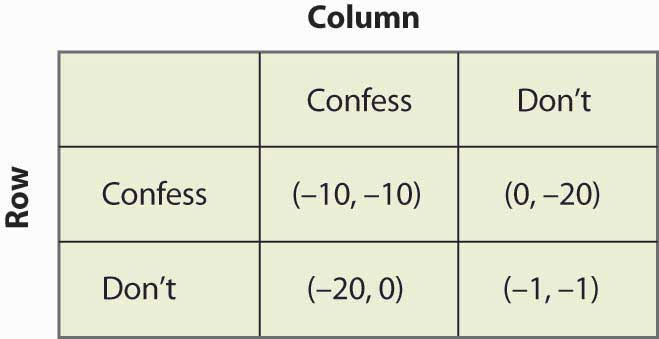 In the prisoner’s dilemma, two criminals named Row and Column have been apprehended by the police and are being questioned separately. They are jointly guilty of the crime. Each player can choose either to confess or not. If Row confesses, we are in the top row of the matrix (corresponding to the row labeled “Confess”). Similarly, if Column confesses, the payoff will be in the relevant column. In this case, if only one player confesses, that player goes free and the other serves 20 years in jail. (The entries correspond to the number of years lost to prison. The first entry is always Row’s payoff; the second entry is Column’s payoff.) Thus, for example, if Column confesses and Row does not, the relevant payoff is the first column and the second row. 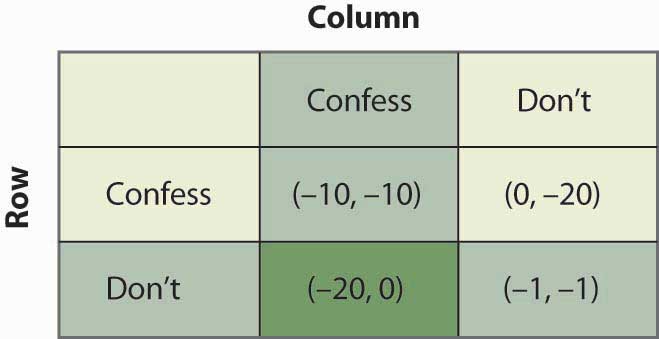 If Column confesses and Row does not, Row loses 20 years, and Column loses no years; that is, it goes free. This is the payoff (–20, 0) in reverse color in Figure 16.2 "Solving the prisoner’s dilemma". If both confess, they are both convicted and neither goes free, but they only serve 10 years each. Finally, if neither confesses, there is a 10% chance that they are convicted anyway (using evidence other than the confession), in which case they each average a year lost.

The prisoner’s dilemma is famous partly because it is readily solvable. First, Row has a strict advantage to confessing, no matter what Column is going to do. If Column confesses, Row gets –10 for confessing, –20 for not confessing, and thus is better off confessing. Similarly, if Column doesn’t confess, Row gets 0 for confessing (namely, goes free), –1 for not confessing, and is better off confessing. Either way, no matter what Column does, Row should choose to confess.If Row and Column are friends and care about each other, that should be included as part of the payoffs. Here, there is no honor or friendship among thieves, and Row and Column only care about what they themselves will get. This is called a dominant strategy, a strategy that is optimal no matter what the other players do.

The logic is exactly similar for Column: No matter what Row does, Column should choose to confess. That is, Column also has a dominant strategy to confess. To establish this, first consider what Column’s best action is, when Column thinks Row will confess. Then consider Column’s best action when Column thinks Row won’t confess. Either way, Column gets a higher payoff (lower number of years lost to prison) by confessing.

The presence of a dominant strategy makes the prisoner’s dilemma particularly easy to solve. Both players should confess. Note that this gets them 10 years each in prison, and thus isn’t a very good outcome from their perspective; but there is nothing they can do about it in the context of the game, because for each the alternative to serving 10 years is to serve 20 years. This outcome is referred to as (Confess, Confess), where the first entry is the row player’s choice, and the second entry is the column player’s choice.

In this case, if both companies enter, Microsoft ultimately wins the market, earning 2 and Piuny loses 2. If either firm has the market to itself, it gets 5 and the other firm gets zero. If neither enters, they both get zero. Microsoft has a dominant strategy to enter: It gets 2 when Piuny enters, 5 when Piuny doesn’t, and in both cases it does better than when it doesn’t enter. In contrast, Piuny does not have a dominant strategy: Piuny wants to enter when Microsoft doesn’t, and vice versa. That is, Piuny’s optimal strategy depends upon Microsoft’s action; or, more accurately, Piuny’s optimal strategy depends upon what Piuny believes Microsoft will do.

Piuny can understand Microsoft’s dominant strategy if it knows the payoffs of Microsoft.It isn’t so obvious that one player will know the payoffs of another player, which often causes players to try to signal that they are going to play a certain way—that is, to demonstrate commitment to a particular advantageous strategy. Such topics are taken up in business strategy and managerial economics. Thus, Piuny can conclude that Microsoft is going to enter, and this means that Piuny should not enter. Thus, the equilibrium of the game is for Microsoft to enter and Piuny not to enter. This equilibrium is arrived at by the iterated elimination of dominated strategies, eliminating strategies by sequentially removing strategies that are dominated for a player. First, we eliminated Microsoft’s dominated strategy in favor of its dominant strategy. Microsoft had a dominant strategy to enter, which means that the strategy of not entering was dominated by the strategy of entering, so we eliminated the dominated strategy. That leaves a simplified game in which Microsoft enters, as shown in Figure 16.4 "Eliminating a dominated strategy".

Figure 16.5 "A 3 x 3 game" shows another game, with three strategies for each player. 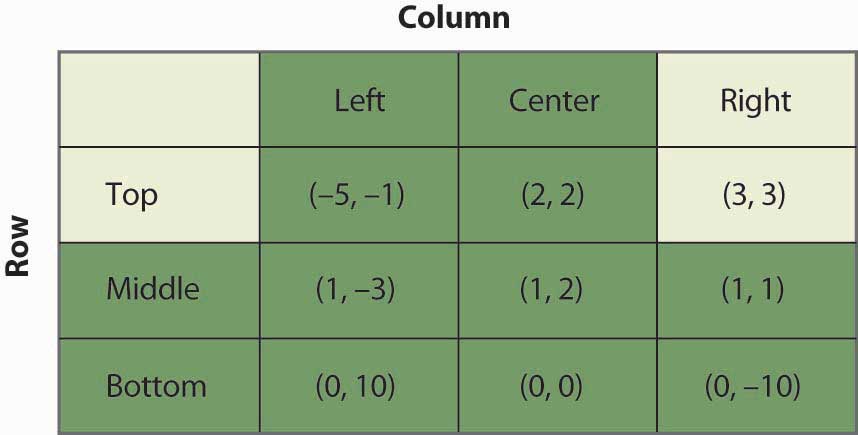 The iterated elimination of dominated strategies is a useful concept, and when it applies, the predicted outcome is usually quite reasonable. Certainly it has the property that no player has an incentive to change his or her behavior given the behavior of others. However, there are games where it doesn’t apply, and these games require the machinery of a Nash equilibrium, named for Nobel laureate John Nash (1928–).