There are many types of rural settlements. Using as classification criteria the shape, internal structure, and streets texture, settlements can be classified into two broad categories: clustered and dispersed.

A clustered rural settlement is a rural settlement where a number of families live in close proximity to each other, with fields surrounding the collection of houses and farm buildings. The layout of this type of village reflects historicalcircumstances, the nature of the land, economic conditions, and local cultural characteristics. The rural settlement patterns range from compact to linear, to circular, and grid.

This model has a center where several public buildings are located such as the community hall, bank, commercial complex, school, and church. This center is surrounded by houses and farmland. Small garden plots are located in the first ring surrounding the houses, continued with large cultivated land areas, pastures, and woodlands in successive rings. The compact villages are located either in the plain areas with important water resources or in some hilly and mountainous depressions. In some cases, the compact villages are designed to conserve land for farming, standing in sharp contrast to the often isolated farms of the American Great Plains or Australia (Figure 12.1). 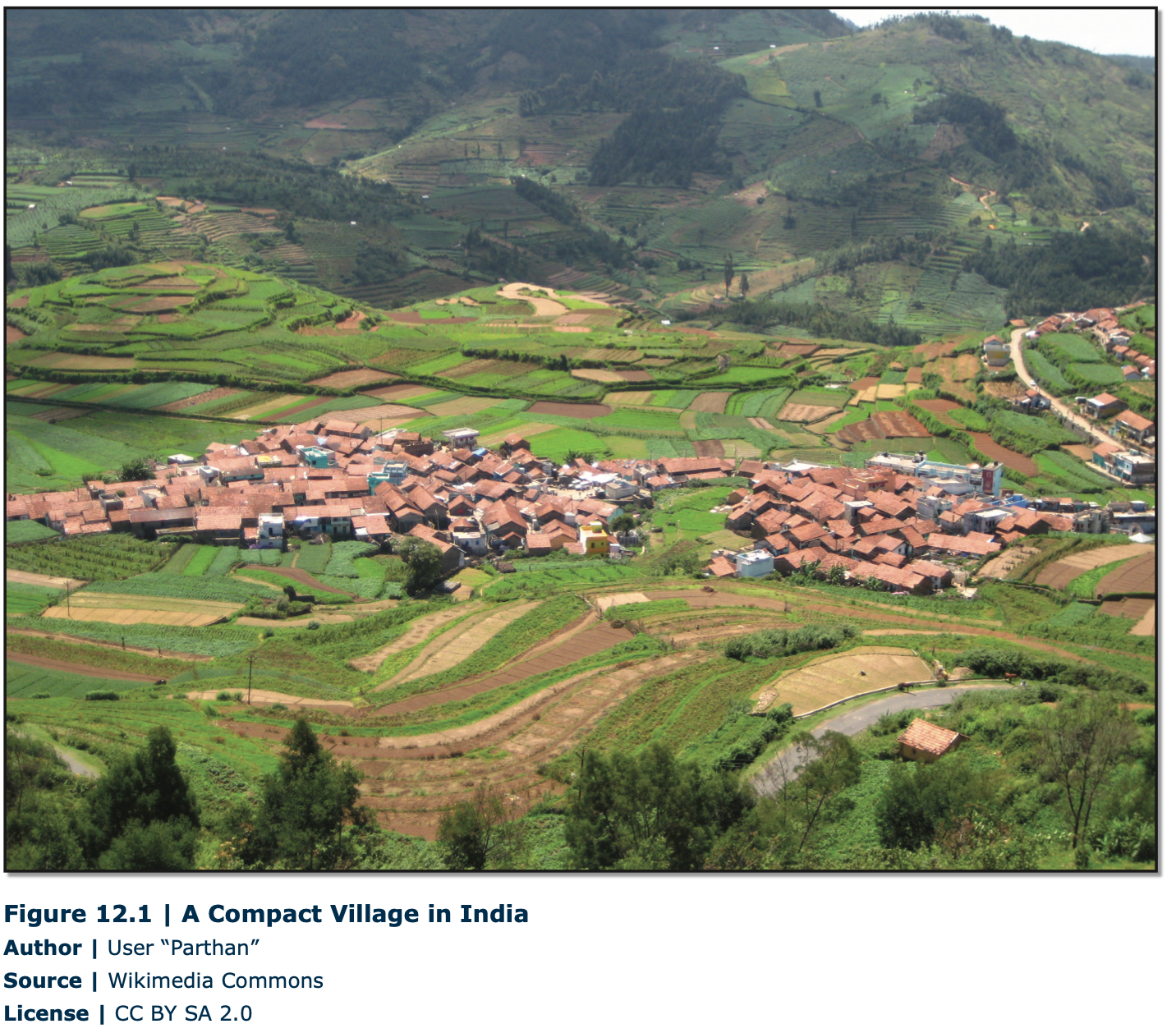 The linear form is comprised of buildings along a road, river, dike, or seacoast. Excluding the mountainous zones, the agricultural land is extended behind the buildings. The river can supply the people with a water source and the availability to travel and communicate. Roads were constructed in parallel to the river for access to inland farms. In this way, a new linear settlement can emerge along each road, parallel to the original riverfront settlement (Figure 12.2). This form consists of a central open space surrounded by structures. Such settlements are variously referred to as a Rundling, Runddorf, Rundlingsdorf, Rundplatzdorf or Platzdorf (Germany), Circulades and Bastides (France), orKraal (Africa). There are no contemporary historical records of the founding of these circular villages, but a consensus has arisen in recent decades. The current leading theory is that Rundlinge were developed at more or less the same time in the 12th century, to a model developed by the Germanic nobility as suitable for small groups of mainly Slavic farm-settlers. Also, in the medieval times, villages in the Languedoc, France, were often situated on hilltops and built in a circular fashion for defensive purpose (Figures 12.3 and 12.4).

Although far from the German territory, Romania has a unique, circular German village. Located southwestern Romania, Charlottenburg is the only round village in the country. The village was established around 1770 by Swabians who came to the region as part of the second wave of German colonization. In the middle of the village is a covered well surrounded by a perfect circle of mulberry trees behind which are houses with stables, barns, and their gardens in the external ring. Due to its uniqueness, the beautiful village plan from the baroque era has been preserved as a historical monument (Figure 12.5). 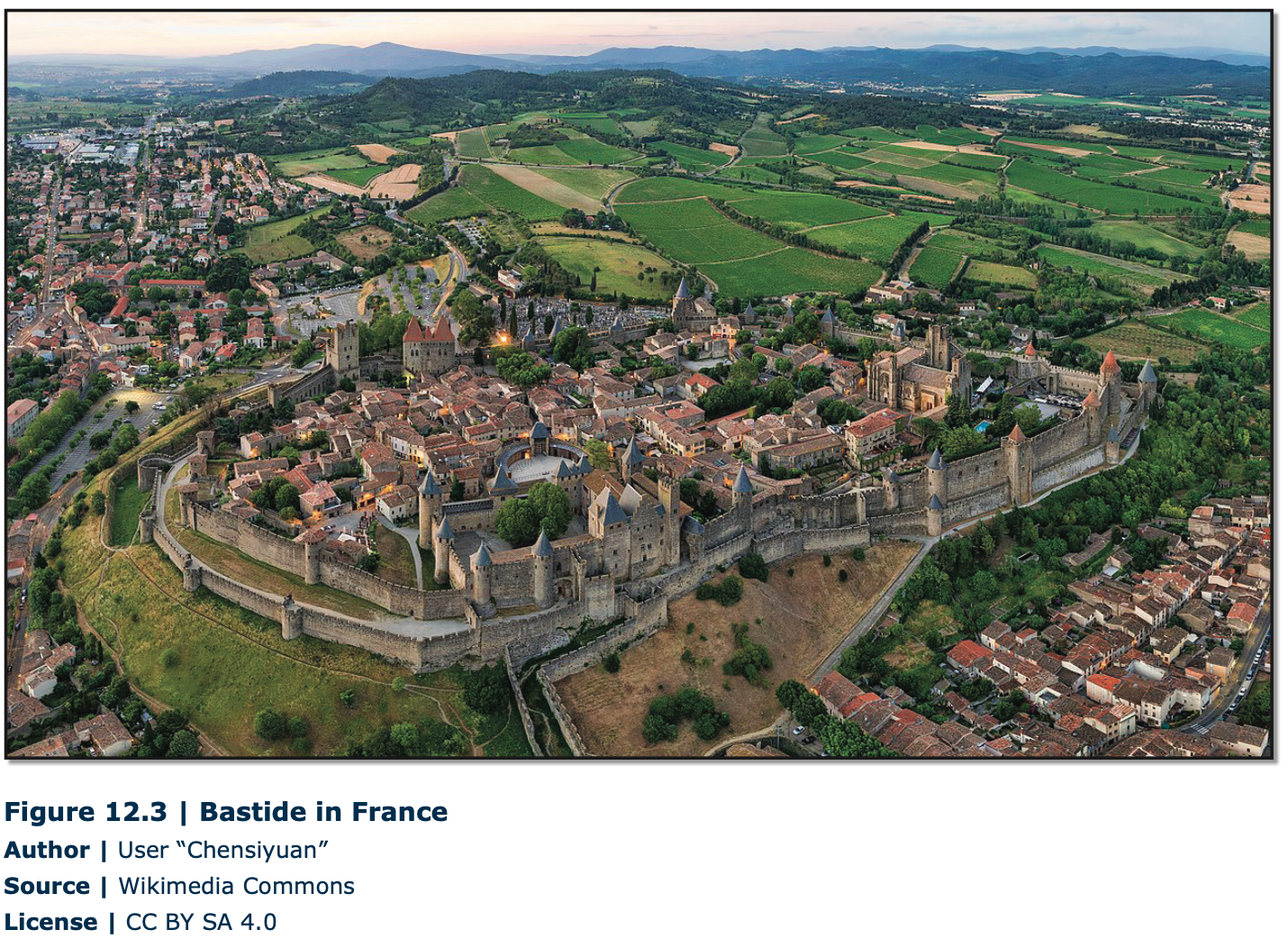 A scattered dispersed type of rural settlement is generally found in a variety of landforms, such as the foothill, tableland, and upland regions. Yet, the proper scattered village is found at the highest elevations and reflects the rugged terrain and pastoral economic life. The population maintains many traditional features in architecture, dress, and social customs, and the old market centers are still important. Small plots and dwellings are carved out of the forests and on the upland pastures wherever physical conditions permit. Mining, livestock raising, and agriculture are the main economic activities, the latter characterized by terrace cultivation on the mountain slopes. The sub-mountain regions, with hills and valleys covered by plowed fields, vineyards, orchards, and pastures, typically have this type of settlement.

This form consists of separate farmsteads scattered throughout the area in which farmers live on individual farms isolated from neighbors rather than alongside other farmers in settlements. The isolated settlement pattern is dominant in rural areas of the United States, but it is also an important characteristic for Canada, Australia, Europe, and other regions. In the United States, the dispersed settlement pattern was developed first in the Middle Atlantic colonies as a result of the individual immigrants’ arrivals. As people started to move westward, where land was plentiful, the isolated type of settlements became dominant in the American Midwest. These farms are located in the large plains and plateaus agricultural areas, but some isolated farms, including hamlets, can also be found in different mountainous areas (Figures 12.7 and 12.8). 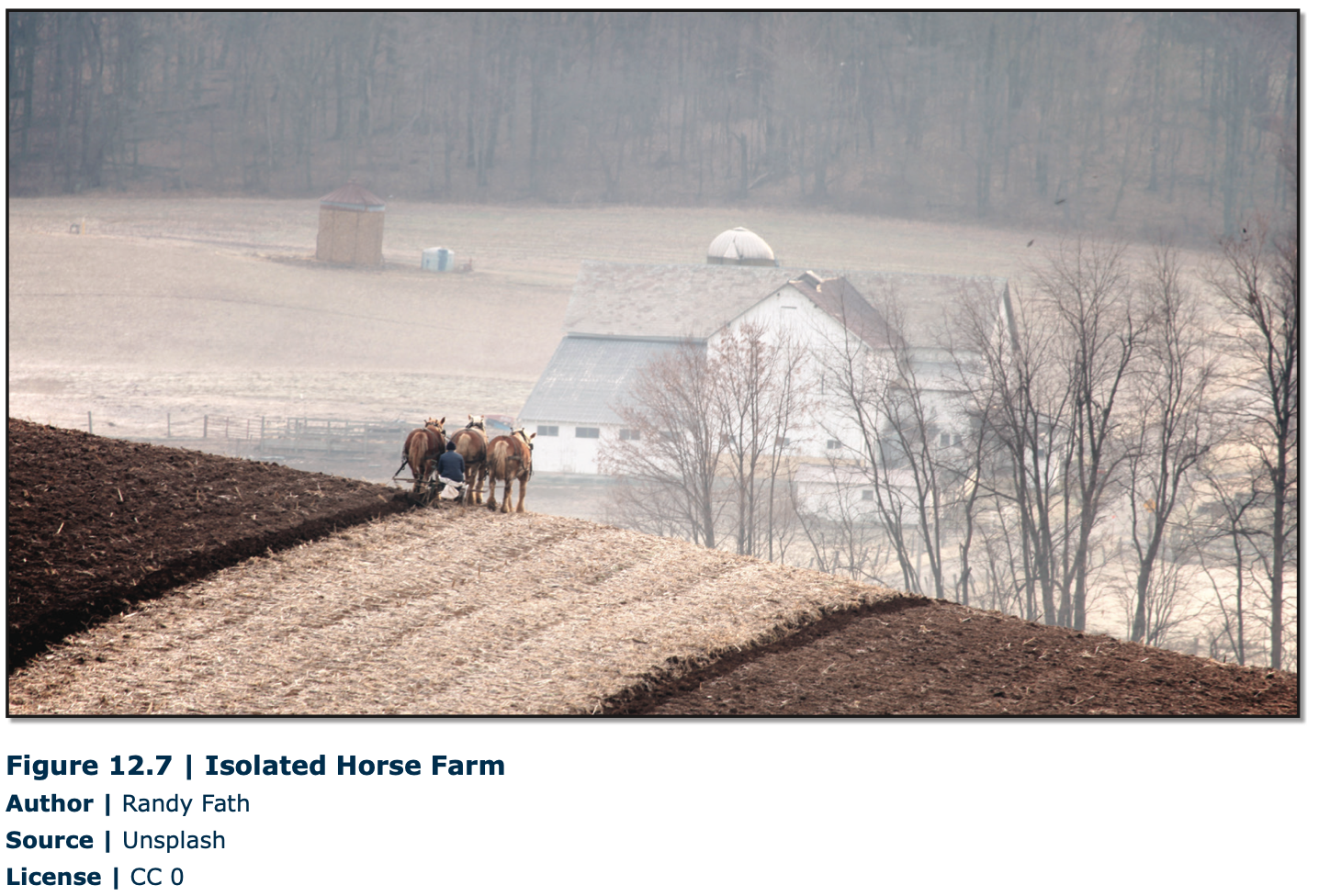