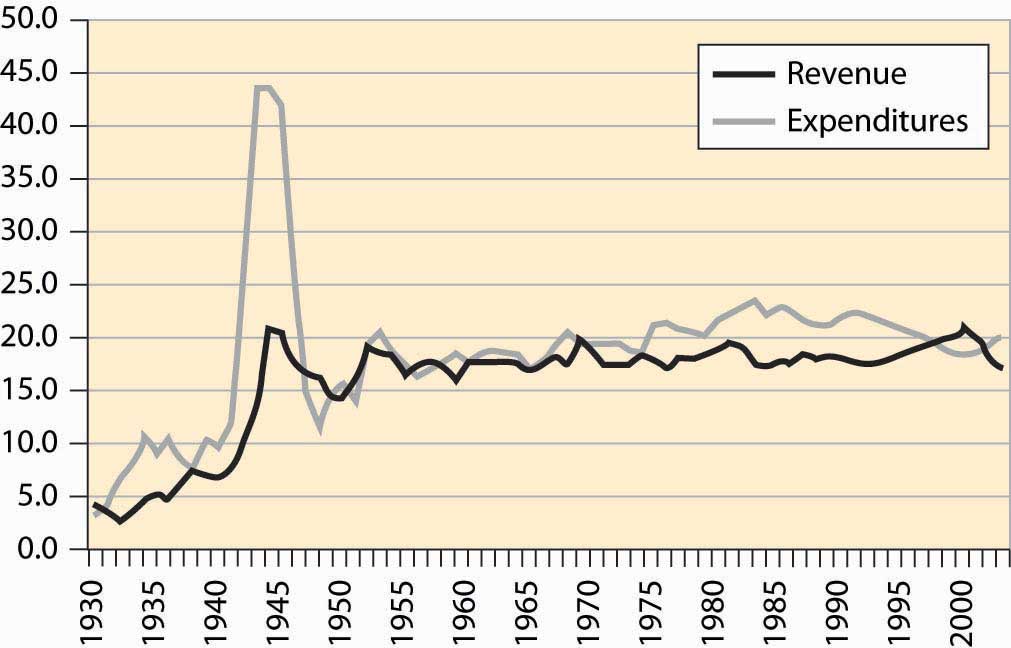 Figure 4.42 Federal expenditures, on and off budget (% GDP) 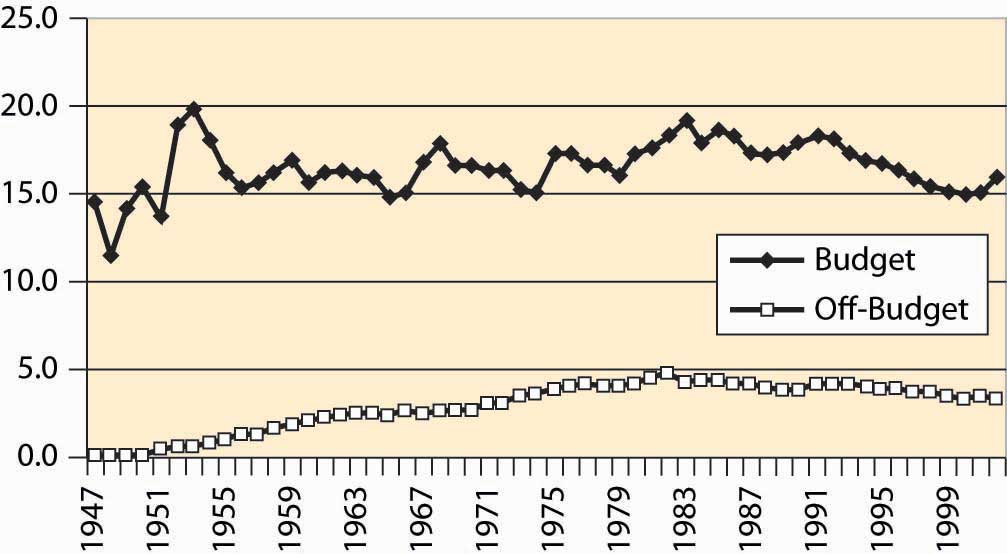 During the 1980s, the public became aware of off-budget items. Political awareness made off-budget items cease to work as a device for evading balanced-budget requirements, and few new ones were created, although they continue to be debated. Sporadically, there are attempts to push social security off-budget. 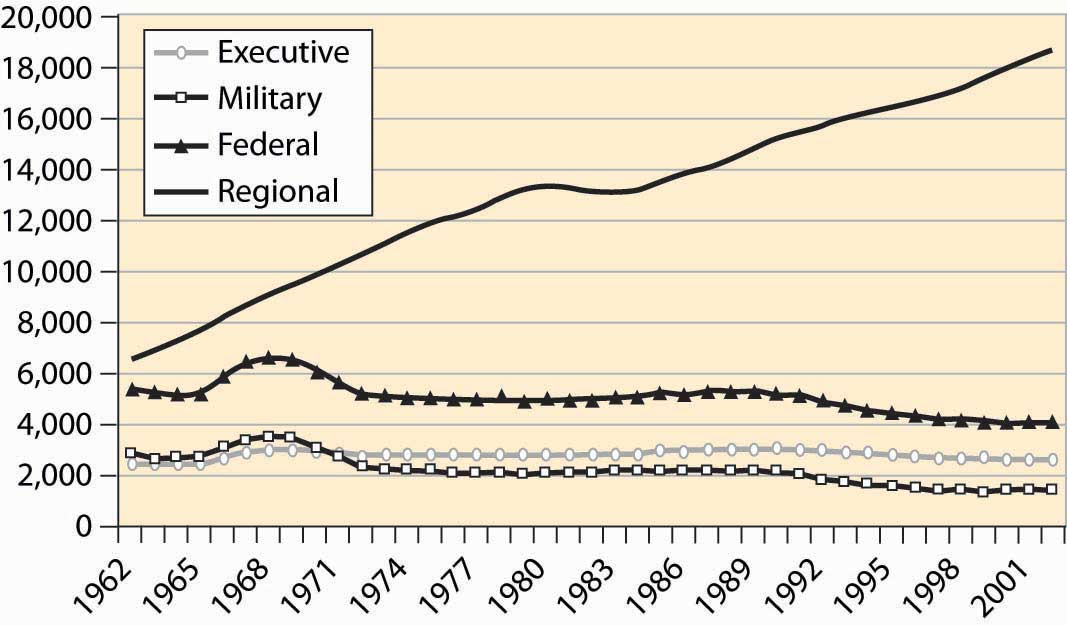 Federal employees include two major categories: uniformed military personnel and the executive branch. State and local government is much larger and has tripled in size since 1962, a fact illustrated in Figure 4.43 "Federal and regional government employment". The biggest growth areas involve public school teachers, police, corrections (prisons), and hospitals. About 850,000 of the federal employees work for the postal service.

Starting in the late 1970s, the United States began accumulating debt faster than it was growing, and the debt began to rise. That trend wasn’t stabilized until the 1990s, and then only because the economy grew at an extraordinary rate by historical standards. The expenditures following the September 11, 2001, terrorist attacks, combined with a recession in the economy, have sent the debt rising dramatically, wiping out the reduction of the 1990s.

The national debt isn’t out of control, yet. At 4% interest rates on federal borrowing, we spend about 2.5% of GDP on interest servicing the federal debt. The right evaluation of the debt is as a percentage of GDP; viewed as a percentage, the size of the debt is of moderate size—serious but not critical. The serious side of the debt is the coming retirement of the baby boom generation, which is likely to put additional pressure on the government.

An important distinction in many economic activities is one between a stock and a flow. A stock is the current amount of some material; flow represents the rate of change in the amount of some material that exists from one instant to the next. Your bank account represents a stock of money; expenditures and income represent a flow. The national debt is a stock; the deficit is the addition to the debt and is a flow. If you think about a lake with incoming water and evaporation, the amount of water in the lake is the stock of water, while the incoming stream minus evaporation is the flow.

Table 4.1 Expenditures on agencies as percent of non-transfer expenditures

The National Science Foundation (NSF) provides funding for basic research. The general idea of government-funded research is that it is useful for ideas to be in the public domain and, moreover, that some research isn’t commercially viable but is valuable nevertheless. Studying asteroids and meteors produces little, if any, revenue but could, perhaps, save humanity one day in the event that we needed to deflect a large incoming asteroid. (Many scientists appear pessimistic about actually deflecting an asteroid.) Similarly, research into nuclear weapons might be commercially viable; but, as a society, we don’t want firms selling nuclear weapons to the highest bidder. In addition to the NSF, the National Institutes of Health, also a government agency, funds a great deal of research. How much does the government spend on research and development (R&D)? Figure 4.48 "Federal spending on R&D (% GDP)" shows the history of R&D expenditures. The 1960s “space race” competition between the United States and the Soviet Union led to the greatest federal expenditure on R&D, and it topped 2% of GDP. There was a modest increase during the Reagan presidency (1980–1988) in defense R&D, which promptly returned to earlier levels. 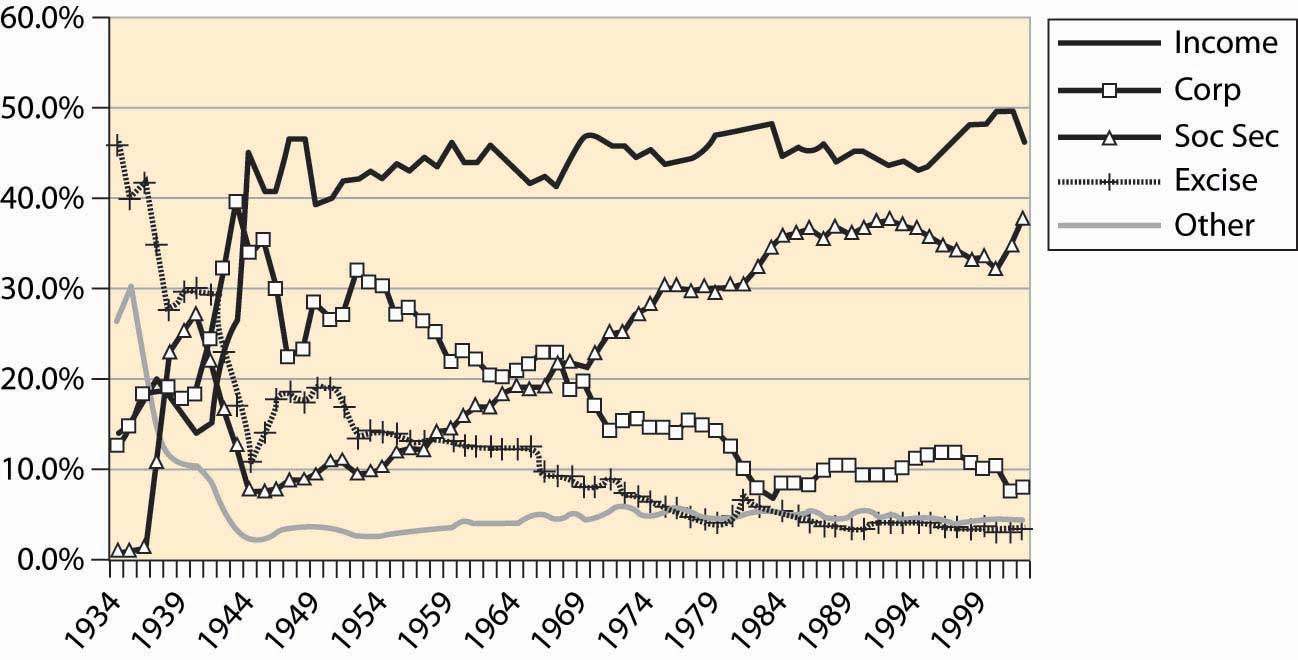 An important aspect of tax collection is that income taxes, like the federal income tax as well as social security and Medicare taxes, are very inexpensive to collect relative to sales taxes and excise taxes. Income taxes are straightforward to collect even relative to corporate income taxes. Quite reasonably, corporations can deduct expenses and the costs of doing business and are taxed on their profits, not on revenues. What is an allowable deduction, and what is not, makes corporate profits complicated to administer. Moreover, from an economic perspective, corporate taxes are paid by consumers in the form of higher prices for goods, at least when industries are competitive.