Scientific research is a critical tool for successfully navigating our complex world. Without it, we would be forced to rely solely on intuition, other people’s authority, and blind luck. While many of us feel confident in our abilities to decipher and interact with the world around us, history is filled with examples of how very wrong we can be when we fail to recognize the need for evidence in supporting claims. At various times in history, we would have been certain that the sun revolved around a flat earth, that the earth’s continents did not move, and that mental illness was caused by possession. It is through systematic scientific research that we divest ourselves of our preconceived notions and superstitions and gain an objective understanding of ourselves and our world. 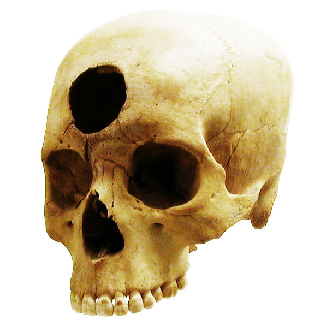 Figure \(\PageIndex{1}\): Some of our ancestors, across the world and over the centuries, believed that trephination—the practice of making a hole in the skull, as shown here—allowed evil spirits to leave the body, thus curing mental illness and other disorders. (credit: “taiproject”/Flickr)

The goal of all scientists is to better understand the world around them. Psychologists focus their attention on understanding behavior, as well as the cognitive (mental) and physiological (body) processes that underlie behavior. In contrast to other methods that people use to understand the behavior of others, such as intuition and personal experience, the hallmark of scientific research is that there is evidence to support a claim. Scientific knowledge is empirical: It is grounded in objective, tangible evidence that can be observed time and time again, regardless of who is observing.

While behavior is observable, the mind is not. If someone is crying, we can see behavior. However, the reason for the behavior is more difficult to determine. Is the person crying due to being sad, in pain, or happy? Sometimes we can learn the reason for someone’s behavior by simply asking a question, like “Why are you crying?” However, there are situations in which an individual is either uncomfortable or unwilling to answer the question honestly, or is incapable of answering. For example, infants would not be able to explain why they are crying. In such circumstances, the psychologist must be creative in finding ways to better understand behavior. This chapter explores how scientific knowledge is generated, and how important that knowledge is in forming decisions in our personal lives and in the public domain.

Use of Research Information

In the meantime, we should strive to think critically about the information we encounter by exercising a degree of healthy skepticism. When someone makes a claim, we should examine the claim from a number of different perspectives: what is the expertise of the person making the claim, what might they gain if the claim is valid, does the claim seem justified given the evidence, and what do other researchers think of the claim? This is especially important when we consider how much information in advertising campaigns and on the internet claims to be based on “scientific evidence” when in actuality it is a belief or perspective of just a few individuals trying to sell a product or draw attention to their perspectives.

We should be informed consumers of the information made available to us because decisions based on this information have significant consequences. One such consequence can be seen in politics and public policy. Imagine that you have been elected as the governor of your state. One of your responsibilities is to manage the state budget and determine how to best spend your constituents’ tax dollars. As the new governor, you need to decide whether to continue funding the D.A.R.E. (Drug Abuse Resistance Education) program in public schools (Figure \(\PageIndex{2}\)). This program typically involves police officers coming into the classroom to educate students about the dangers of becoming involved with alcohol and other drugs. According to the D.A.R.E. website (www.dare.org), this program has been very popular since its inception in 1983, and it is currently operating in \(75\%\) of school districts in the United States and in more than \(40\) countries worldwide. Sounds like an easy decision, right? However, on closer review, you discover that the vast majority of research into this program consistently suggests that participation has little, if any, effect on whether or not someone uses alcohol or other drugs (Clayton, Cattarello, & Johnstone, 1996; Ennett, Tobler, Ringwalt, & Flewelling, 1994; Lynam et al., 1999; Ringwalt, Ennett, & Holt, 1991). If you are committed to being a good steward of taxpayer money, will you fund this particular program, or will you try to find other programs that research has consistently demonstrated to be effective? Figure \(\PageIndex{2}\): The D.A.R.E. program continues to be popular in schools around the world despite research suggesting that it is ineffective.

Ultimately, it is not just politicians who can benefit from using research in guiding their decisions. We all might look to research from time to time when making decisions in our lives. Imagine you just found out that a close friend has breast cancer or that one of your young relatives has recently been diagnosed with autism. In either case, you want to know which treatment options are most successful with the fewest side effects. How would you find that out? You would probably talk with your doctor and personally review the research that has been done on various treatment options—always with a critical eye to ensure that you are as informed as possible.

In the end, research is what makes the difference between facts and opinions. Facts are observable realities, and opinions are personal judgments, conclusions, or attitudes that may or may not be accurate. In the scientific community, facts can be established only using evidence collected through empirical research.

The Process of Scientific Research For example, case studies, which you will read about in  a later section, are heavily weighted on the side of empirical observations. Thus, case studies are closely associated with inductive processes as researchers gather massive amounts of observations and seek interesting patterns (new ideas) in the data. Experimental research, on the other hand, puts great emphasis on deductive reasoning.

We’ve stated that theories and hypotheses are ideas, but what sort of ideas are they, exactly? A theory is a well-developed set of ideas that propose an explanation for observed phenomena. Theories are repeatedly checked against the world, but they tend to be too complex to be tested all at once; instead, researchers create hypotheses to test specific aspects of a theory.

A hypothesis is a testable prediction about how the world will behave if our idea is correct, and it is often worded as an if-then statement (e.g., if I study all night, I will get a passing grade on the test). The hypothesis is extremely important because it bridges the gap between the realm of ideas and the real world. As specific hypotheses are tested, theories are modified and refined to reflect and incorporate the result of these tests. 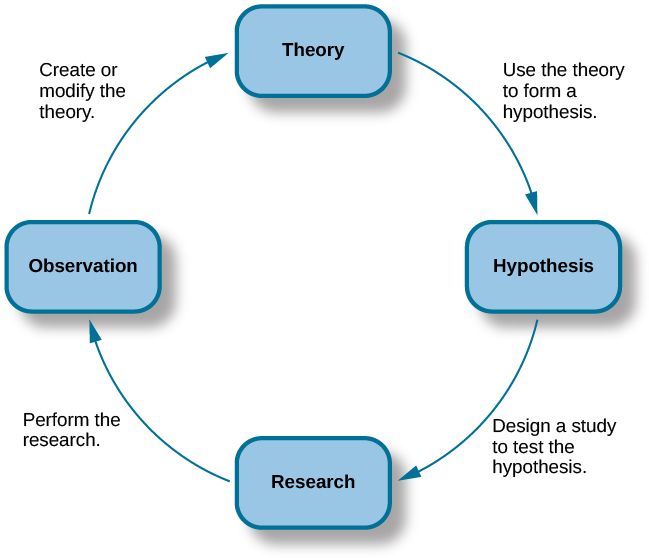 Figure \(\PageIndex{4}\): The scientific method of research includes proposing hypotheses, conducting research, and creating or modifying theories based on results.

To see how this process works, let’s consider a specific theory and a hypothesis that might be generated from that theory. As you’ll learn in a later chapter, the James-Lange theory of emotion asserts that emotional experience relies on the physiological arousal associated with the emotional state. If you walked out of your home and discovered a very aggressive snake waiting on your doorstep, your heart would begin to race and your stomach churn. According to the James-Lange theory, these physiological changes would result in your feeling of fear. A hypothesis that could be derived from this theory might be that a person who is unaware of the physiological arousal that the sight of the snake elicits will not feel fear.

A scientific hypothesis is also falsifiable, or capable of being shown to be incorrect. Recall from the introductory chapter that Sigmund Freud had lots of interesting ideas to explain various human behaviors. However, a major criticism of Freud’s theories is that many of his ideas are not falsifiable; for example, it is impossible to imagine empirical observations that would disprove the existence of the id, the ego, and the superego—the three elements of personality described in Freud’s theories. Despite this, Freud’s theories are widely taught in introductory psychology texts because of their historical significance for personality psychology and psychotherapy, and these remain the root of all modern forms of therapy. Figure \(\PageIndex{5}\): Many of the specifics of (a) Freud's theories, such as (b) his division of the mind into id, ego, and superego, have fallen out of favor in recent decades because they are not falsifiable. In broader strokes, his views set the stage for much of psychological thinking today, such as the unconscious nature of the majority of psychological processes.

In contrast, the James-Lange theory does generate falsifiable hypotheses, such as the one described above. Some individuals who suffer significant injuries to their spinal columns are unable to feel the bodily changes that often accompany emotional experiences. Therefore, we could test the hypothesis by determining how emotional experiences differ between individuals who have the ability to detect these changes in their physiological arousal and those who do not. In fact, this research has been conducted and while the emotional experiences of people deprived of an awareness of their physiological arousal may be less intense, they still experience emotion (Chwalisz, Diener, & Gallagher, 1988).

Scientific research’s dependence on falsifiability allows for great confidence in the information that it produces. Typically, by the time information is accepted by the scientific community, it has been tested repeatedly.

Scientists are engaged in explaining and understanding how the world around them works, and they are able to do so by coming up with theories that generate hypotheses that are testable and falsifiable. Theories that stand up to their tests are retained and refined, while those that do not are discarded or modified. In this way, research enables scientists to separate fact from simple opinion. Having good information generated from research aids in making wise decisions both in public policy and in our personal lives.

deductive reasoning
results are predicted based on a general premise

empirical
grounded in objective, tangible evidence that can be observed time and time again, regardless of who is observing

falsifiable
able to be disproven by experimental results

hypothesis
(plural: hypotheses) tentative and testable statement about the relationship between two or more variables

opinion
personal judgments, conclusions, or attitudes that may or may not be accurate